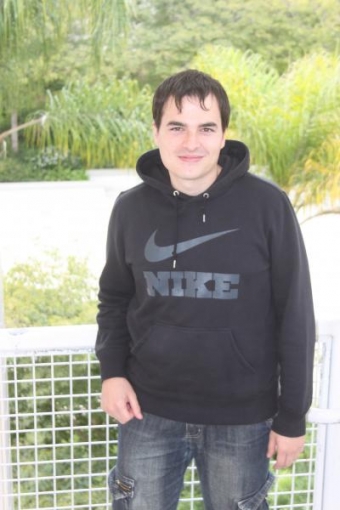 Nov. 2013 - Like the 99 Catalans before him, Adrián Ortega Novillo left the northeast region of Spain behind to study engineering at UC Irvine. He is the 100th Balsells Fellow.

The Balsells-Generalitat Fellowship program at the Samueli School of Engineering was created in 1995, with an endowment by successful engineer and Catalan native Pete J. Balsells. The first Balsells Fellows arrived at UCI in 1996. Each year, the program has grown. Today the Samueli School hosts around 25 of Catalonia’s most talented young engineers and scientists who wish to pursue graduate studies and conduct research in engineering.

“Reaching 100 fellows is a significant mark because it underscores the long-term impact of the program, which started 17 years ago with only two students,” says Roger Rangel, professor of mechanical and aerospace engineering and Balsells Fellowship Program director. “These fellows conduct research, publish papers and help obtain grant funds. It’s a very competitive program that receives additional support from the Catalan government.”

Ortega is working in the lab of Lorenzo Valdevit, an associate professor in mechanical and aerospace engineering. Ortega holds a bachelor’s degree in industrial engineering and a master’s degree in mechanics of material and structures, both from the University of Girona, where his research focused on fracture mechanics. In Valdevit’s lab, Ortega is looking at the mechanical behavior of micro-architected materials (in particular, fracture of micro-lattices).

“Given that Adrián came to UCI with considerable experience on fracture modeling of engineering materials, this project is a natural fit for him,” says Valdevit who has mentored several Balsells graduate and undergrad students over the years. “My experiences with all these students have been incredibly positive, both professionally and personally.   Adrián joined my group just a month ago, and hit the ground running. He immediately started producing research results, and has already intellectually contributed to the project.”

“Whether I was the 99th or the 100th fellow, I would still work as hard,” says Ortega. “I came here to study and to participate in more prestigious research. If I graduate with a doctorate from UCI, I will more likely have better career opportunities.”

In the mid-1940s, Peter Balsells, the program’s founder, left Catalonia for America for the same reason – better opportunity.  “I really had to struggle, 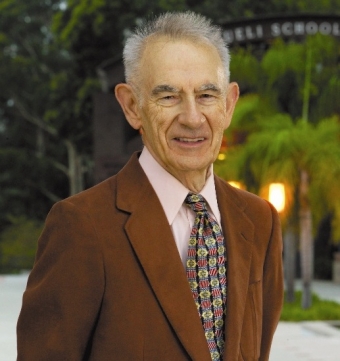 so I wanted to help others get the best education possible,” says Balsells who overcame great hardship while growing up in Spain during the oppressive Franco regime. His aunt provided him with a unique opportunity to pursue an engineering education in the U.S. He went on to excel in his studies and subsequent career. Today, Balsells is a successful engineer who holds 120 patents worldwide and is founder and chairman of Bal Seal Engineering.

Ortega’s fellowship is for one year only, but he is hoping to get it renewed or find other funding to stay and earn a doctorate. He’d like a career in academia. According to Rangel, about 37 percent, or more than 1 in 3, of the Balsells fellows pursue a doctorate.  There are currently 25 Balsells graduate students at the Samueli School, which represent just shy of 3 percent of the school’s total graduate-student population.

For now, Ortega is enjoying the great California weather. He’s visited Hollywood, Santa Monica, Venice Beach, and San Diego. He finds the UCI campus full of friendly people. “Every day I meet new people, everyone has a story to tell.”

All the current Balsells Fellows will attend a special luncheon at the University Club in December recognizing Pete Balsells.