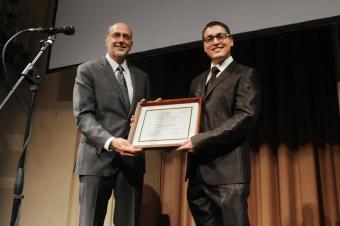 Samueli School of Engineering doctoral student Salvatore Campione has been named a 2013 Marconi Society Paul Baran Young Scholar. This award is given each year to scholars age 27 or younger who have already demonstrated exceptional engineering or scientific research.

Campione, an electrical engineering and computer science graduate student in Associate Professor Filippo Capolino’s research group, is one of three young researchers around the world to receive the honor this year.

“This award means a great deal to me,” says Campione. “I have felt a renewed sense of pride in my work and its significance. I chose to be a researcher to be able to make a difference in society, as many have done before me. There are so many unspoken demands in this profession, including long-term effort and commitment. A recognition such as the Marconi Society Young Scholar Award is rewarding and the unexpected fuel needed to further the journey.”

“In selecting its Young Scholar recipients, the Marconi Society looks for those who not only have shown extraordinary early promise, but whose research already has been published and made an impact,” says Robert Tkach, chairman of the Young Scholar selection committee and a 2009 Marconi Prize Winner. 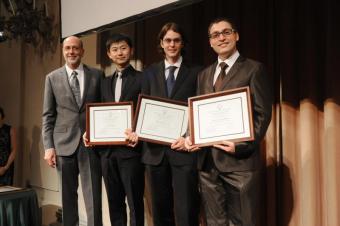 Campione collaborates with a number of researchers worldwide on applying electromagnetics to nanostructures, nano-antennas, plasmonics, metamaterials, and their characterization. His research has possible applications in such fields as medical diagnostics, solar cells, molecular sensors, imaging systems, generation of coherent light sources, and next generation optoelectronic devices. Campione has published more than 20 peer-reviewed journal articles, more than 40 conference articles, and two book chapters. He has been awarded scholarships from the International Society for Optics and Photonics (SPIE), a Photonics Society Graduate Student Fellowship from the Institute of Electrical and Electronics Engineers, and the Forum on Graduate Student Affairs Travel Award for Excellence in Graduate Research from the American Physical Society.

"I am truly thankful Salvatore joined my research group,” says Capolino. “He has displayed exceptional academic and research capabilities, very strong analytical maturity, and very good creative thinking by developing innovative ideas. I strongly believe he is rapidly setting the path for an outstanding career in academic research either as a faculty member or a senior research member in the field of applied electromagnetics and optics of nanostructures."

Campione attended the Marconi Society’s annual gala in Bologna, Italy, in early October. “The ceremony was during a formal gala dinner in front of more than 200 people, many of whom are some of the most brilliant people in the field of telecommunications and internet, and it was just overwhelming, really amazing,” he says.

The Marconi Society was established in 1974 through an endowment set up by Gioia Marconi Braga, daughter of Guglielmo Marconi, the Nobel laureate who invented radio (wireless telegraphy). It is best known for the Marconi Prize, awarded annually to outstanding individuals whose scope of work and influence emulate the principle of “creativity in service to humanity” that inspired Marconi. Last year’s Marconi Prize was presented to Henry Samueli, co-founder of Broadcom Corporation and a distinguished adjunct professor of electrical engineering and computer science.