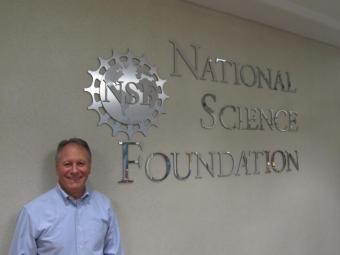 Professor Bill Cooper has been appointed director of the environmental engineering program in the NSF’s Chemical, Bioengineering, Environmental and Transport Systems Division. As a professor of civil and environmental engineering and director of the UC Irvine Urban Water Research Center, Cooper is used to seeking out funding from government agencies. This new position places him on the other side of the table. As an NSF program director, he will be involved in determining which project proposals to support with agency funding.

“My main objective is to try and fund as many meritorious proposals as possible,” says Cooper.  “Due to recent events, we are receiving a number of short-term proposals aimed at better understanding the environmental impacts, for example, of the Yosemite Fire on the water supply of San Francisco and the massive floods in Boulder and the surrounding areas, and looking for engineering solutions.”

Cooper’s research expertise is in water and the environment. He was most recently an invited speaker at the International Atomic Energy Agency’s Scientific Forum General Assembly in Vienna, Austria in mid-September, where he addressed scientists from around the world. The forum, titled “The Blue Planet, Nuclear Applications for a Sustainable Marine Environment” drew more than 3,000 people. Cooper presented and participated in a panel focused on what happens to water from “Hilltops to Oceans.”

Fresh from this conference, he arrived at his new post in Arlington, Virginia, just in time for the government shutdown. “I never expected to come here to not work!” says Cooper, who will serve in his new position for one year, with the option of second year extension.

Cooper is excited about the ability to network with colleagues from other agencies and the National Academies. “One of the most rewarding aspects of the job is to interact with the environmental engineering and science community throughout the U.S.,” he says.