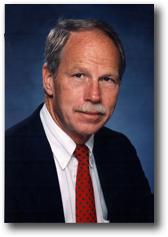 Robert Liebeck, Ph.D., adjunct professor of mechanical and aerospace engineering (MAE), has received the 2010 Daniel Guggenheim Medal, “for distinguished engineering as evidenced by the conception and development of Liebeck airfoils and Blended Wing Body aircraft.”

The Daniel Guggenheim Medal honors individuals who make notable achievements in the advancement of aeronautics.  Its first recipient was Orville Wright.  Provision for the medal was made in 1928 through a gift from the Daniel Guggenheim Fund for the Promotion of Aeronautics.  The award, established in 1929, is administered by the Guggenheim Medal Board of Award (jointly sponsored by the American Institute of Aeronautics and Astronautics, American Society of Mechanical Engineers, and American Helicopter Society).

Liebeck is a member of the National Academy of Engineering and a world-renowned authority in the fields of aerodynamics and aircraft design.  He is also an Honorary Fellow of the American Institute of Aeronautics and Astronautics and Fellow of the Royal Aeronautical Society.  In his long and distinguished career, he has held top positions at The Boeing Company and The Douglas Aircraft Company, and has taught and conducted research at the University of Southern California. He is currently a Senior Fellow at The Boeing Company and teaches MAE's senior-year Aerodynamics / Aircraft Performance / Aircraft Design (MAE136/158/159) sequence at UC Irvine. He is also involved in graduate and undergraduate research projects, and is a Professor of the Practice of Aeronautics at the Massachusetts Institute of Technology.

He attained world recognition starting in the 1970’s with his novel designs for high-lift airfoils, referred to by the aeronautics community as the "Liebeck airfoils." He has made substantial contributions to a variety of related fields, including propeller design, windmill analysis, wing design for subsonic transports, and the design of high-altitude unmanned aircraft.  He is co-developer of the Blended-Wing-Body (BWB), a revolutionary design for subsonic transports. The BWB is widely considered as the next revolution in subsonic commercial transportation. It is a 450-passenger, "flying wing" aircraft with significantly lower fuel burn and noise than traditional tube and wing transports. The BWB is a top priority at NASA and is under serious consideration by Boeing, to the point that a 21-foot model is currently being flight-tested at the NASA Dryden Flight Research Center (Edwards Air Force Base).