Dean's Distinguished Lecture: How to Achieve Net-Zero Greenhouse Gas Emissions in the United States by Midcentury 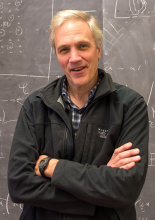 Abstract: Scientific evidence has been clear for some time that global net emissions of all anthropogenic greenhouse gases must fall to zero by 2050 if humanity is to have a reasonable chance of limiting global warming to substantially less than 2 degrees Celsius. However, it is only in the past couple of years that the net-zero goal has been widely adopted by countries, states, cities and companies. I first argue that this shift was caused primarily by an unheralded revolution in energy technology, which was itself the result of decades of public policy. I then turn to two recent studies that together, provide an engineering and policy manual for the transition to net-zero in the United States by 2050.

The first is the Princeton Net Zero America Project (NZAP), which was released in December 2020. NZAP provides a geographically and sectorally granular blueprint for a 30-year transition to each of several feasible net-zero energy systems. The study was designed to answer the question posed by a lawmaker, “What’s in it for my constituents?” The primary conclusions of NZAP are first, the transition is affordable. The U.S. would spend a smaller fraction of its GDP on energy during the 30-year transition, than it has over the last 30 years. Second, the transition would achieve health benefits during the first 10 years that dwarf its cost. And, third, the transition would cause an increase in energy jobs, but some locations with a high concentration of fossil jobs would see declines in energy employment. However, public policy could address this problem because many net-zero industrial jobs are not tethered to a specific location.

The second study is a National Academies of Sciences, Engineering and Medicine (NASEM) report, released on Feb. 2, 2021, which I chaired. Unlike NZAP, which is a policy-neutral engineering analysis, the NASEM study proposes a specific portfolio of policies for the first 10 years of a fair and equitable 30-year transition to net-zero emissions. Many post-release conversations with federal officials and lawmakers confirm that the primary concern in Washington is no longer cost, but rather employment, fairness, equity and environmental justice. The NASEM report is the only analysis focusing equally on the technical aspects of the transition, as well as on fairness, equity and justice.

Bio: Stephen W. Pacala is the Frederick D. Petrie Professor of Ecology and Evolutionary Biology at Princeton University. He directs the Carbon Mitigation Initiative, an effort to develop solutions to the greenhouse-warming problem. Pacala also sits on the Environmental Defense Fund Board of Trustees and is a founder and chairman of the Board of Climate Central, a nonprofit media organization focusing on climate change. A member of the National Academy of Sciences, Pacala most recently chaired the National Academies of Sciences, Engineering and Medicine’s Accelerating Decarbonization of the U.S. Energy System Committee, which released its first report in February 2021.