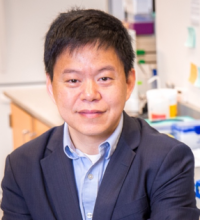 Abstract: Genetically-encoded biosensors based on fluorescence resonance energy transfer (FRET) have been successfully developed to monitor the activity of a variety of signaling molecules, including tyrosine/serine/threonine kinases. We have developed a high-throughput screening (HTS) method based on directed evolution and next generation sequencing (NGS) to develop sensitive and specific FRET biosensors, which allowed the visualization of signaling transduction and epigenetic dynamics in live cells. We have also engineered a novel class of machinery molecules, which can provide a surveillance of the intracellular space, monitoring and visualizing the endogenous molecular events, and automatically triggering corresponding molecular activations to guide cellular functions. A modular assembly approach was developed to engineer these machinery molecules, and applied them to reprogram the “don’t eat me” CD47 receptor SIRPa on macrophages such that the engagement of SIRPa and its activation of naturally negative signals will be rewired to turn on positive actions to facilitate phagocytosis of target tumor cells. We have further integrated lights and ultrasound to remotely control the genetic activities, which allowed us to activate immune cells with high precision in space and time for cancer immunotherapy. Because of the modular design of our engineered molecule, our approach can be extended to perform a broad range of cell-based imaging and immunotherapies, and hence highlight the translational power in bridging the fundamental molecular engineering to clinical medicine.

Bio: Peter Yingxiao Wang obtained his bachelor’s and master’s degrees in mechanics and fluid mechanics from Peking University in Beijing, China, in 1992 and 1996, respectively. He received his Ph.D. degree in bioengineering from UC San Diego in 2002 and continued his postdoctoral work at UC San Diego working under bioengineering professor Shu Chien and pharmacology professor Roger Y. Tsien. He is currently a professor at the Department of Bioengineering at UCSD and a fellow of the American Institute of Medical and Biological Engineering (AIMBE). Before joining the UC San Diego faculty in 2012, he was an associate professor at the University of Illinois Urbana-Champaign Department of Bioengineering and a full-time faculty member at the Beckman Institute for Advanced Science and Technology at the University of Illinois. Wang is the recipient of the Wallace H. Coulter Early Career Award (both Phase I and Phase II), the National Science Foundation CAREER Award, and National Institutes of Health Independent Scientist Award. His research is supported by the National Institutes of Health, National Science Foundation and private foundations.