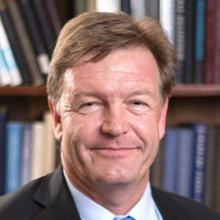 Zoom link to be distributed by CBE department (For non-UCI persons: see link below to register )
Andrew M. Herring, Ph.D.

Abstract: From fundamental studies of cationic membranes, we were able to show that very high anionic conductivities could be achieved in thin robust membranes with controlled water contents. Over the last several years, we have further developed these advanced anion exchange membranes (AEMSs) to improve both their chemical and mechanical stability. One of these polymers is being commercialized as the TuffBrane material, and we are now deploying this membrane in devices for electrochemical energy conversion or water purification. While there has been a large amount of work to develop electrocatalysts for fuel cells, much of this was optimized using rotating disk electrodes in aqueous solvents. In solid state electrochemical energy conversion devices using polymer electrolytes, the electrolyte is a polymer with a local morphology and chemistry. This has led us to conclude that it is the polymer/catalyst interfaces that must be understood and improved to achieve the maximum performance in these devices. We have used a toolbox of random, di-block and triblock polymers where the hydrophobic component or block is polycyclooctene, poly isoprene or their hydrogenated analogues, polyethylene or polymethylbutylene. The hydrophilic component or block is derived from polychloromethylstyrene via quaternization with trimethylamine or methyl pyrrolidine to give the more stable MPRD cation. We have begun our studies using Ag as a model system, although our plans are to extend these studies to Ni. Our first studies used commercial Ag colloids as catalyst particles; these studies showed that we could actually change the degree of crystallinity of the polyethylene block in triblock anion exchange polymers and so alter the polymers water uptake. We then extended this work to spin coated thin films on atomically flat silicon wafers or the same substrate with an Ag coating and were able to show a number of these polymers had very strong vertical alignment using grazing incident small angle X-ray scattering. Ongoing work on Ni foams in separated anode experiments is showing that the same polymers can also dramatically affect the onset potential and Tafel slope for the oxygen evolution reaction in carbonate electrolyte with or without the addition of the Ag colloids. Our eventual goal is to develop a polymer system that will self-template catalyst particles for eventual roll-to-roll processing of device components.

Bio: Herring’s interests are generally in materials or catalysis to enable renewable energy, energy efficiency, energy storage or the mitigation of problems involving wastewater or plastics. His work is currently focused on low- and intermediate-temperature polymer electrolyte materials, an effort that began 26 years ago. Herring is developing anion exchange membranes for electrolysis and fuel cells, and proton exchange membranes for increased durability or higher fuel cell operating temperatures and membranes for ion selective redox flow batteries or water applications.

Herring has a bachelor's degree in chemistry and a doctorate in inorganic and structural chemistry with the late Professor Bernard L. Shaw from the University of Leeds, UK.  After postdoctoral appointments at Caltech and NREL, he joined the Colorado School of Mines (CSM) as a research associate in 1995. After 26 years at CSM, Herring is now a professor in the Department of Chemical and Biological Engineering. He was elected as a fellow of the American Chemical Society in 2016, and serves as the chair of the Fuel (now Energy and Fuels) Division. In 2018, he was awarded the ACS Energy and Fuels Division Storch Award in Fuel Chemistry. He is also a fellow of the Electrochemical Society (2020) where he previously served as chair of the Energy Technology Division. He currently serves as president of the CSM Faculty Senate.