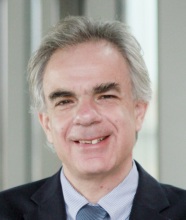 Abstract: Traditionally, process control systems rely on centralized control architectures utilizing dedicated, wired links to measurement sensors and control actuators to regulate appropriate process variables at desired values. While this paradigm to process control has been successful, we are currently witnessing an augmentation of the existing, dedicated control systems, with additional networked (wired and/or wireless) actuator/sensor devices that have become cheap and easy to install. Such an augmentation in sensor information, actuation capability and network-based availability of data has the potential to dramatically improve the ability of process control systems to optimize closed-loop performance and prevent or deal with abnormal situations more effectively. However, augmenting dedicated control systems with real-time sensor and actuator networks pose a number of new challenges in control system design that cannot be addressed with traditional process control methods, including: a) the substantial increase in the number of process state variables, manipulated inputs and measurements that may complicate the organization and maintenance of centralized control systems as well as impede their ability to carry out real-time calculations within the limits set by process dynamics and operating conditions (particularly when nonlinear constrained optimization-based control systems like model predictive control are used), and b) the  handling of additional, potentially asynchronous and/or delayed measurements in the overall distributed control system.

To address these key challenges, we have focused on the development of rigorous, yet practical methods for the design of distributed model predictive control systems for chemical processes described by nonlinear dynamic models. Specifically, we have developed methods for the design of nonlinear distributed model predictive control systems that utilize a fraction of the time required by the respective centralized control systems to compute optimal manipulated input trajectories and cooperate in an efficient fashion to achieve desired plant-wide performance, stability and fault-handling objectives. In this context, methods for handling key practical issues like the decomposition of the control loops, the utilization of asynchronous and/or delayed measurements, and the integration of process economics and feedback control leading to economic model predictive control systems will be discussed. We will present applications of the developed distributed and economic predictive control systems to chemical processes and distributed energy generation systems using detailed nonlinear models. Finally, we will  present an overview of our experimental efforts on the development of pilot-scale autonomous, integrated water ultrafiltration/desalination systems employing our control methods and their application to three field studies.

Bio: Panagiotis D. Christofides was born in Athens, Greece, in 1970. He received the diploma in chemical engineering degree in 1992, from the University of Patras, Greece, master's degrees in electrical engineering and mathematics in 1995 and 1996, respectively, and a doctorate in chemical engineering in 1996, all from the University of Minnesota. Since July 1996, he has been with UCLA, where he is currently a Distinguished Professor and department chair in the Department of Chemical and Biomolecular Engineering, a Distinguished Professor in the Department of Electrical and Computer Engineering and the holder of the William D. Van Vorst Chair in Chemical Engineering Education. His theoretical research interests include nonlinear and predictive control, and analysis and control of distributed parameter systems, multiscale systems and hybrid systems, with applications to chemical processes, advanced materials processing, particulate processes, energy and water systems. His research work has resulted in a large number of articles in leading scientific journals and conference proceedings and seven books that have earned him a Google Scholar h-index of 71, to date. He has advised over 60 graduate students and has graduated 37 doctoral students, many of whom hold leading positions in academia or industry including 12 on the faculty of major universities worldwide.

A description of his research interests and a list of his publications and students can be found at http://pdclab.seas.ucla.edu/pchristo/. He has received several awards for his teaching and research work, including the Teaching Award from the AIChE Student Chapter of UCLA in 1997, a Research Initiation Grant from the ACS-Petroleum Research Fund in 1998, a CAREER award from the National Science Foundation in 1998, a Young Investigator Award from the Office of Naval Research in 2001, and the Ted Peterson Student Paper Award, the Outstanding Young Researcher Award and the Computing in Chemical Engineering Award from the Computing and Systems Technology Division of AIChE in 1999, 2008 and 2018, respectively. He has also twice received the O. Hugo Schuck Best Paper Award in 2000 and 2004, and the Donald P. Eckman Award in 2004, all from the American Automatic Control Council. He is a fellow of AAAS, AIChE, IEEE and IFAC. He has served on the editorial board of leading control and chemical engineering journals and conferences.