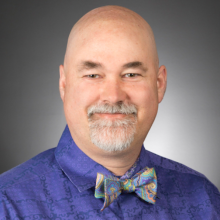 Abstract: With the steady advances in sophistication and reduction in cost, size, weight and power (C-SWaP) of computational architectures and RF front ends, the historical expectations about RF system limitations are wrong, and consequently, many of the system concepts and standards that we currently use are ripe for reconsideration. We discuss the implications both from the perspective of evolving capabilities and from the perspective of new system approaches. Specifically, we discuss a next-generation processor that is an enabler for many RF low-C-SWaP applications. We also discuss examples of these new approaches that will likely change how we use the RF spectrum. Specifically, we discuss RF convergence that uses RF spectrum for multiple functionalities simultaneously, such as communications and radar spectrum sharing.

Bio: Daniel W. Bliss is a professor in the School of Electrical, Computer, and Energy Engineering at Arizona State University and a fellow of the IEEE. He is also the director of ASU's Center for Wireless Information Systems and Computational Architectures (wisca.asu.edu). Bliss received his master's degree and doctorate in physics from the UC San Diego (1995 and 1997), and his bachelor's degree in electrical engineering from ASU (1989). His current research focuses on advanced systems in the areas of communications, radar, precision positioning and medical monitoring. Bliss has been the principal investigator on numerous programs including sponsored programs with DARPA, ONR, Google, Airbus and others. He is responsible for foundational work in electronic protection, adaptive multiple-input multiple-output (MIMO) communications, MIMO radar, distributed-coherent systems and RF convergence. Before moving to ASU, Bliss was a senior member of the technical staff at MIT Lincoln Laboratory (1997-2012).

Between his undergraduate and graduate degrees, Bliss was employed by General Dynamics (1989-1993), where he designed avionics for the Atlas-Centaur launch vehicle and performed magnetic field optimization for high-energy, particle-accelerator superconducting magnets. His doctoral work (1993-1997) was in the area of high-energy particle physics and lattice-gauge-theory calculations. Bliss is a member of the IEEE AES Radar Systems Panel and is a member of the IEEE Signal Processing Magazine Editorial Board.