Zoom link to be distributed by CBE department
Marc Madou

Abstract: Over the last two decades, we have gained more and more insight into how to convert patterned polymer precursors into predicable 3D carbon shapes by pyrolysis/carbonization (see Figure 1 carbon origami for a recent example). Over the last four years, we have started gaining control over the internal carbon microstructure and its functionality. The key to the latter is a precise control of the polymer precursor chains and the exact polymer atomic composition of the polymer before and during pyrolysis. Contradicting Rosalind Franklin, we have found that it is possible to graphitize even non-graphitizing carbons simply by applying mechanical stresses to align the polymer precursor chains and stabilizing them in position before pyrolysis. Perhaps the most surprising outcome of this work is the demonstration eight months ago of the conversion of PAN fibers through pyrolysis into turbostratic graphene-suspended wires with diameters as small as 2 nanometers (see Figure 2). The suspended graphene bridges have a conductivity similar to that of multiwall carbon nanotubes  (MWCNTs)  a  Young’s modulus  of  >  400  GPa  and electrochemically, the material behaves  like graphene doped with nitrogen. The latter material represents a very electroactive electrode ideally suited for energy and sensing applications. The current fabrication process for graphene doped with nitrogen is lengthy and complicated; ours is a one-step simple process that is easily scalable. 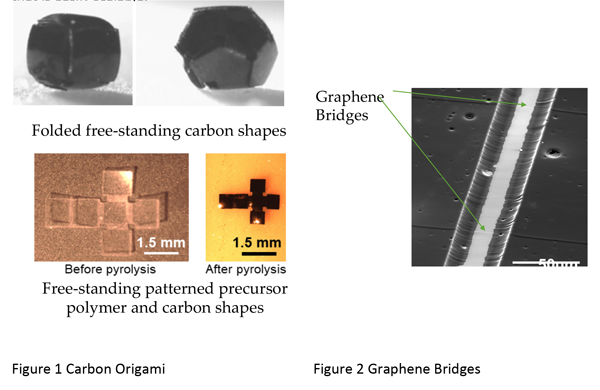 Bio: Before joining UCI as the Chancellor’s Professor in mechanical and aerospace engineering, Marc Madou was vice president of advanced technology at Nanogen in San Diego. He specializes in the application of miniaturization technology to chemical and biological problems (BIO-MEMS). The author of several books, Madou helped pioneer this burgeoning field both in academia and in Industry. He founded several micromachining companies and has been on the board of many more.

Today, Madou works with research teams in India (IIT Kharagpur), Mexico (Tec de Monterrey), Malaysia (UM) and Germany (KIT). In the recent past, he also worked on large projects with teams in South Korea and Canada.

Madou was the founder of the SRI International’s Microsensor Department, founder and president of Teknekron Sensor Development Corp. (TSDC), visiting Miller Professor at UC Berkeley and an endowed chair at The Ohio State University, where he was a professor in chemistry and materials science and engineering. He is the author of the third edition of “Fundamentals of Microfabrication,” an introduction to MEMS and NEMS, which has become known as the “bible” of micromachining.

Madou has an h-index of 77 (as of May 14, 2020) and is considered the pioneer of two research fields that are now being pursued worldwide: carbon micro- and nanofabrication (C-MEMS and C-NEMS) and compact disc fluidics (CD-Fluidics) for molecular diagnostics. These two technologies have resulted in at least 10 startup companies worldwide. Of those founded by Madou, Enevate, a lithium ion battery company in Irvine, California, is the largest and best known.

To find out more about his most recent research projects, visit www.biomems.net.