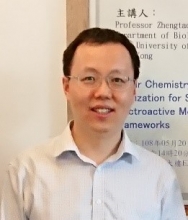 Abstract: In the first part, we employ a two-step strategy for accessing crystalline porous covalent networks of highly conjugated π-electron systems. For this, we first assembled a crystalline metal-organic framework (MOF) precursor based on Zr(IV) ions and a linear dicarboxyl linker molecule featuring backfolded, highly unsaturated alkyne backbones; massive thermocyclization of the organic linkers was then triggered to install highly conjugated, fused-aromatic bridges throughout the MOF scaffold while preserving the crystalline order. The resultant polycyclic aromatic network exhibits greatly enhanced stability, electroactivity and charge transport. In the second part, we report breakthroughs in the modular synthesis of MOF solids extensively equipped with the mercaptan function (Figure 1), in order to fully exploit the unique metal-uptake, catalytic and electronic properties afforded by the thiol function. The widened access of thiol-equipped MOFs facilitates in-depth exploration of open framework sulfur chemistry, achieving, for instance, fast removal of Hg below the drinking limit of 2 ppb.

Figure 1 The formation of a Zr(IV)-based cubic network from ZrCl4 and a tetratopic carboxylic linker equipped with 8 mercaptan groups.

Bio: After earning his B.S. degree (1996) at Peking University, Xu planned to go into organic chemistry, only to join Stephen Lee’s group at Michigan and receive a Ph.D. from Cornell for work on coordination networks (MOFs). After a postdoc with David Mitzi (IBM, 2001-03), he moved to George Washington University as an assistant professor to begin working on sulfur-equipped MOFs. As life would have it, he then started anew in Hong Kong (2005), and became a professor in 2015. His group has an interest in bridging the two worlds of coordination and covalent frameworks.