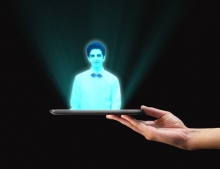 Abstract: Free-space volumetric displays, or displays that create luminous image points in space, are the technology that most closely resembles the 3D displays of popular fiction. Such displays are capable of producing images in "thin air" that are visible from almost any direction and are not subject to clipping. Clipping restricts the utility of all 3D displays that modulate light at a 2D surface with an edge boundary; these include holographic displays, nanophotonic arrays, plasmonic displays, lenticular or lenslet displays, and all technologies in which the light-scattering surface and the image point are physically separate. Here, we present a free-space volumetric display based on optical trapping that produces full-color graphics in free space with 10-micrometer image points using persistence of vision. This display works by first trapping a cellulose particle in the focal point of a near-UV laser beam. The trap and particle are then scanned through a display volume while being illuminated with red, green and blue light. The result is a three-dimensional image in free space with a large color gamut, fine detail and low apparent speckle. This platform, named the Optical Trap Display is capable of producing image geometries that are currently unobtainable with holographic and light-field technologies, such as long-throw projections, tall sandtables and wrap-around displays.

Bio: Kamran Qaderi is an electroholographer working at a new startup called Pacific Light & Hologram, located in South Pasadena, California, since 2017. He holds a master’s degree and doctorate from Brigham Young University, Utah. He completed his degree in 2017 under Daniel Smalley's supervision in the field of electrical engineering focusing on 3D displays such as holographic video monitors and volumetric displays. During Kamran's studies at BYU’s electroholography lab, Smalley published a paper in collaboration with Qaderi titled "A photophoretic-trap volumetric display" that forms the basis for this talk. Currently, Qaderi lives in Pasadena and is conducting research on his passion, holographic displays.