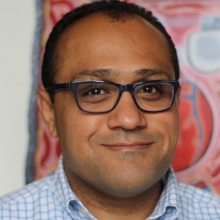 Abstract: Heart disease is the leading cause of death worldwide. More than 600,000 people die of heart disease in the United States every year. Many of the inherited cardiac disease phenotypes such as hypertrophic and dilated cardiomyopathies are linked to missense mutations in sarcomeric (basic unit of cardiac muscle contraction process) regulatory proteins. These mutations and post-translational modifications influence not only the molecular contraction dynamics, but also affect cellular-tissue wall mechanics interactions, which in turn affect heart pumping efficiency. In other words, these mutations affect not only cardiac muscle contractility and myocardial wall mechanics, but also the intraventricular blood flow dynamics. In this talk, I will present a novel molecular-to-organ, multiscale model that can bridge the gap between molecular mutations effect during the activation process of the cardiac muscle contraction and the alterations in the cardiac blood flow motions during cardiac disease. The model is based on the Brownian flashing ratchet theory for the molecular scale and is using Langevin dynamics stochastic principle for the subcellular and cellular scales. The Brownian-Langevin dynamical approaches are then integrated into a finite element model for the electro-mechanical-hemodynamics coupling at the whole organ scale. The model is then used to predict the phenotype remodeling of cardiac function during heart failure diseases triggered by genotype mutations in the sarcomere.

Bio: Yasser Aboelkassem is currently an assistant research scientist in the Department of Bioengineering at UC San Diego. He obtained his bachelor's degree in aeronautics from Cairo University and his master's degree in mathematics and doctorate in mechanics from Virginia Tech. Aboelkassem was a postdoctoral associate in the Department of Biomedical Engineering and Medicine at Johns Hopkins University, and prior to that he was a postdoctoral fellow in the Department of Biomedical Engineering and School of Medicine at Yale University. He recently obtained his mini-MBA degree from Rady School of Management at UC San Diego. Aboelkassem’s research focuses on hemodynamics, microcirculation and fluid transport in the human cardiovascular system, as well as multiscale modeling of cardiac mechanics. He uses computational and experimental tools to investigate the relationships between the cellular and extracellular structure of cardiac muscle and the hemodynamics, electrical and mechanical function of the whole heart during cardiac diseases.