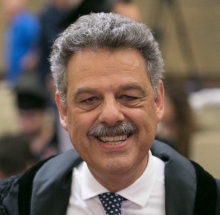 Abstract: This lecture deals with a class of systems that are becoming ubiquitous in the current and future "distributed world" made by countless "nodes," which can be cities, computers, people, etc., and interconnected by a dense web of transportation, communication or social ties. The term "network," describing such a collection of nodes and links, has become commonplace, thanks to our extensive reliance on "connections of interdependent systems" in our everyday life, for building complex technical systems, infrastructures and more. In an increasingly "smarter" planet, it is expected that such interconnected systems will be safe, reliable, available 24/7 and of low-cost maintenance – the Industry 4.0 vision. Therefore, health monitoring, fault diagnosis and fault-tolerant control are important to ensure high levels of safety, performance, reliability, dependability and availability. In the lecture, I consider the process industry as a paradigm, in which faults and malfunctions can result in off-specification production, increased operating costs, production-line shutdown, dangerous conditions for humans, detrimental environmental impact, and so on. Faults and malfunctions need to be detected promptly and their source and severity should be diagnosed so that corrective actions can be taken as soon as possible. Once a fault is detected, the faulty subsystem can be unplugged to avoid the propagation of the fault in the interconnected large-scale system. Analogously, once the issue has been solved, the disconnected subsystem can be re-plugged-in.

In the talk, I will discuss an adaptive approximation-based distributed fault diagnosis approach for large-scale nonlinear systems, by exploiting a "divide et impera" approach in which the overall diagnosis problem is decomposed into smaller sub-problems, which can be solved within “local” computation architectures. The distributed detection, isolation and identification task is broken down and assigned to a network of "Local Diagnostic Units," each having a "local view" of the system.

Moreover, the lecture will address the integration of a distributed-model predictive control scheme and a distributed fault-diagnosis architecture. Specifically, in the off-line control design phase we adopt a decentralized algorithm and we assume that the design of a local controller can use information at most from parents of the corresponding subsystem, i.e., subsystems that influence its dynamics. This implies that the whole model of the large-scale system is never used in any step of the design process. This approach has several advantages in terms of scalability: i) the communication flow at the design phase has the same topology of the coupling graph - usually sparse - ii) the local design of controllers and fault detectors can be conducted independently; iii) local design complexity scales with the number of parent subsystems only; iv) if a subsystem joins/leaves an existing network (plug-in/unplugging operation) at most children/parents subsystems have to retune their controllers and fault detectors. We refer to this kind of decentralized synthesis as plug & play design, if - in addition - the plug-in and unplugging operations can be performed through a procedure for automatically assessing whether the operation does not spoil stability and constraint satisfaction for the overall large-scale system.

In the lecture, the connection is finally worked out with Virtual Commissioning and Digital Twins, which is the very recent trend in the process industry to make the dream of plug & work installation of a reliable and efficient automation system a reality.

Bio: Thomas Parisini received the Ph.D. degree in electronic engineering and computer science in 1993 from the University of Genoa. He was with Politecnico di Milano, and since 2010, has held the Chair of Industrial Control and is director of research at Imperial College London. He is a deputy director of the KIOS Research and Innovation Centre of Excellence, University of Cyprus. Since 2001, he has held the Danieli Endowed Chair of Automation Engineering with University of Trieste. From 2009-2012 he was deputy rector at University of Trieste. In 2018, he received an honory doctorate from University of Aalborg, Denmark. He authored or co-authored more than 300 research papers in archival journals, book chapters and international conference proceedings. His research interests include neural-network approximations for optimal control problems, fault diagnosis for nonlinear and distributed systems, nonlinear model predictive control systems and nonlinear estimation. Parisini is a co-recipient of the IFAC Best Application Paper Prize of the Journal of Process Control, Elsevier, for the three-year period 2011-2013 and of the 2004 Outstanding Paper Award of the IEEE Transactons on Neural Networks. He is also a recipient of the 2007 IEEE Distinguished Member Award. In 2016, he was awarded as Principal Investigator at Imperial of the H2020 European Union flagship Teaming Project KIOS Research and Innovation Centre of Excellence led by University of Cyprus with an overall budget of over 40 MEuro. In 2012, he was awarded an ABB Research Grant dealing with energy-autonomous sensor networks for self-monitoring industrial environments. Parisini currently serves as vice-president for publications activities of the IEEE Control Systems Society; during 2009-2016 he was the editor-in-chief of the IEEE Transactions on Control Systems Technology. He has served as editor for Control Applications of Automatica since 2017, and he is the editor in chief of the European Journal of Control since 2018. He is also the chair of the IFAC Technical Committee on Fault Detection, Supervision & Safety of Technical Processes - SAFEPROCESS.  He was the chair of the IEEE Control Systems Society Conference Editorial Board and a distinguished lecturer of the IEEE Control Systems Society. He was an elected member of the Board of Governors of the IEEE Control Systems Society and of the European Control Association (EUCA) and a member of the board of evaluators of the 7th Framework ICT Research Program of the European Union. Parisini is currently serving as an associate editor of the International Journal of Control and served as associate editor of the IEEE Transations on Automatic Control, of the IEEE Transactions on Neural Networks, of Automatica, and of the International Journal of Robust and Nonlinear Control.  Among other activities, he was the program chair of the 2008 IEEE Conference on Decision and Control and general co-chair of the 2013 IEEE Conference on Decision and Control. Parisini is a fellow of the IEEE and of the IFAC.