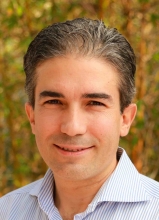 Abstract: This talk addresses the design of efficient surveillance and vehicle-routing strategies for robotic networks in dynamic environments. We focus on how to search an area in a persistent manner -- with minimal average time to detection, with unpredictable trajectories and with optimally partitioned workload among multiple vehicles. The technical approach is based on Markov chains, optimization methods, convexity properties, relaxations and coordination strategies. Coauthors: Xiaoming Duan, Mishel George

Bio: Francesco Bullo is a professor in the Department of Mechanical Engineering and the Center for Control, Dynamical Systems and Computation at UC Santa Barbara. His research interests focus on network systems and distributed control with application to robotic coordination, power grids and social networks. He is the coauthor of “Geometric Control of Mechanical Systems” (Springer, 2004) and “Distributed Control of Robotic Networks” (Princeton, 2009); his “Lectures on Network Systems” (CreateSpace, 2018) is available on his website. Bullo received best paper awards for his work in IEEE Control Systems, Automatica, SIAM Journal on Control and Optimization, IEEE Transactions on Circuits and Systems, and IEEE Transactions on Control of Network Systems. He is a fellow of the IEEE and IFAC. He has served on the editorial boards of IEEE, SIAM and ESAIM journals, and he serves as the 2018 IEEE CSS president.