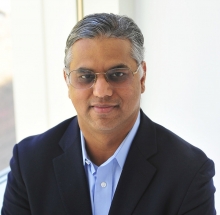 Abstract: Traditionally, industrial robots have been used on mass production lines, where the same manufacturing operation is repeated many times.  Many sectors of manufacturing, such as aerospace, defense, ship building and tool making involve small production volumes. Currently, industrial robots are not used in such applications. The use of smart robotic assistants can significantly improve a human operator’s productivity and eliminate the need for human involvement in tasks that pose risks to human health. This presentation will begin with an overview of recent advances in robots that are enabling realization of hybrid work cells, where humans and robots can collaborate in close physical proximities. These advances enable realizing systems that utilize the complementary strengths of humans and robots. We will present an overview of an integrated decision-making approach that brings together concepts from perception, planning, control and learning to realize robotic assistants that can program themselves from task descriptions. There are many challenging tasks for which a simulation-based approach cannot be used to select the optimal process parameters. For such tasks, we will describe a new approach for robots to learn task parameters from self-directed learning. We will also discuss computational methods for endowing robots with introspection capabilities to enable them to seek help from human operators when robots are unable to complete the task. We will also describe how multi-arm manipulation, mobile manipulation and fixture-free manipulation operations can be used to address requirements of small-volume manufacturing. Bin picking, assembly, composite layup and finishing tasks will be used as illustrative examples to show how smart robotic assistants can be used in manufacturing applications.

Bio: Gupta is the Smith International Professor in the Department of Aerospace and Mechanical Engineering at the University of Southern California, where he is the founding director of the Center for Advanced Manufacturing. He served as a program director for the National Robotics Initiative at the National Science Foundation from September 2012 to September 2014. Gupta's interest is in the area of physics-aware decision-making to facilitate automation. He is specifically interested in automation challenges related to engineering design, manufacturing, and robotics. He has published more than 300 technical articles. He is a fellow of the American Society of Mechanical Engineers (ASME) and editor of ASME Journal of Computing and Information Science in Engineering. Gupta has received several honors and awards for his research contributions, including: Young Investigator Award from the Office of Naval Research in 2000, Robert W. Galvin Outstanding Young Manufacturing Engineer Award from the Society of Manufacturing Engineers in 2001, CAREER Award from the National Science Foundation in 2001, Presidential Early Career Award for Scientists and Engineers (PECASE) in 2001, Invention of the Year Award at the University of Maryland in 2007, Kos Ishii-Toshiba Award from ASME Design for Manufacturing and the Life Cycle Committee in 2011, Excellence in Research Award from ASME Computers and Information in Engineering Division in 2013, and Distinguished Alumnus Award from the Indian Institute of Technology, Roorkee in 2014. He has also received seven best paper awards at conferences.