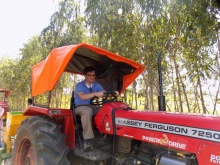 Departments of Biochemistry, Chemistry and Biomedical Engineering
University of Wisconsin-Madison

Abstract: Bacteria and other microorganisms have solved an important physical problem for their survival: how to mechanically resist the remarkably large pressure drop across their cell wall (~105 Pa) that arises due to fluctuating mismatch in concentrations of dissolved solutes inside and outside of the cell.

We still know very little about bacterial cell mechanics, and yet one of the most clinically used family of drugs discovered to-date – the beta-lactam antibiotics – alters cell wall mechanics, creates defects and instabilities, and leads to cell lysis due to the large osmotic pressure drop across the wall. Understanding how bacteria control their mechanical properties will lay the foundation for understanding their adaptation and control.

This talk describes the output from several studies that: 1) demonstrates pathogenic bacteria actively regulate their mechanical properties; 2) indicates the fitness cost for these changes; 3) demonstrates structural changes that are responsible for cell mechanical changes; 4) highlights regulatory biochemistry; and 5) indicates a suite of tools that can be used to identify and decipher mechanical pathways in bacteria. The tools and mindset of this area has applications beyond bacteria and includes pathogenic yeast, fungi and other microorganisms.

Bio: Douglas B. Weibel is a professor of biochemistry, chemistry and biomedical engineering at the University of Wisconsin-Madison. He received his B.S. degree in chemistry in 1996 from the University of Utah (with Prof. C. Dale Poulter). From 1996-1997 he was a Fulbright Fellow at Tohoku University, Japan, and studied organometallic chemistry (with Prof. Yoshinori Yamamoto). He received his Ph.D. in organic chemistry from Cornell University in 2002 (with Prof. Jerrold Meinwald), during which time he was an intern at Orchid Biosciences Inc. (now LabCorp) and a visiting scientist at the Max Planck Institute for Chemical Ecology, Jena, Germany (with Prof. Wilhelm Boland). From 2002-2006 Weibel was a postdoctoral fellow with Prof. George M. Whitesides at Harvard University, and in 2005 he was a student in the physiology course (Modern Cell Biology using Microscopic, Biochemical, and Computational Approaches) at the Marine Biological Laboratory at Woods Hole. He joined the faculty at UW-Madison in 2006 and has concurrently held multiple appointments outside of the university: he was a visiting professor of physics at the University of Washington, Seattle (2014), a visiting professor at Google [X] (2013-2014), and has been a principal scientist at Amazon since 2014. He has consulted for the a range of public and privately held companies in the areas of biotechnology, chemistry, engineering and manufacturing, and has participated in a range of government advisory positions in the areas of biodefense, infectious diseases and biomedicine. His research interests span the fields of chemistry, biochemistry, biophysics, agriculture, materials science and engineering, and microbiology.