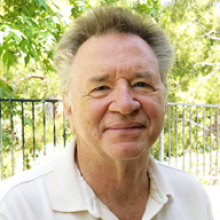 Abstract: Kinematic synthesis is a set of mathematical techniques to calculate the dimensions of a mechanism or robot to achieve a desired task. Since the time of James Watt, whose "parallel motion generator" made the double-acting steam engine practical, engineers and mathematicians have studied curve-drawing linkages for practical as well as theoretical purposes. Recent mathematical results prove that such linkages exist for every algebraic curve, and this talk presents an overview of a variety of techniques to design these linkages. One interesting result is that the equations for kinematic synthesis rapidly expand beyond the ability of current computers to solve completely. On the other hand, because Bezier curves can be written as parameterized trigonometric curves, there is a way to design relatively simple linkage systems that draw Bezier approximations to arbitrary curves. Applications include leg mechanisms for walking and jumping robots and mechanisms for flapping wings.

Bio: J. Michael McCarthy serves as director of UC Irvine’s Performance Engineering Program, after having completed an eight year term as the Henry Samueli Professor and director of the Center for Engineering Science in Design, which supports the design and execution of team engineering projects across the Samueli School of Engineering. He received his doctorate at Stanford University and has taught at Loyola Marymount University and the University of Pennsylvania before joining UCI in 1986.

McCarthy has published articles in over 200 publications and five books including "The Geometric Design of Linkages" (Springer 2000, 2nd Ed. 2010). He has served as the editor-in-chief of the ASME Journal of Mechanical Design (2002-2007) and is the founding editor-in-chief of the ASME Journal of Mechanisms and Robotics (2007-2014). His research team is responsible for the Sphinx, Synthetica and MecGen software packages, which extend computer-aided design to spherical and spatial linkage systems and integrate this process with geometric modeling. He has organized and presented tutorials on the design of linkages and robotic systems at ASME and IEEE conferences, including the NSF-sponsored 2012 Workshop on 21st Century Kinematics.

He is a fellow of the American Society of Mechanical Engineers (ASME), and has received the 2009 ASME Machine Design Award, the 2011 ASME Mechanisms and Robotics Award, and the 2013 Robert E. Abbott Lifetime Service Award from the Design Engineering Division of ASME International. At the 2015 Mechanisms and Robotics Conference, he and his co-author received the A.T. Yang Memorial Award in Theoretical Kinematics for their paper on the design of a linkage system that reproduces the flapping motion of a bird in flight.