MAE Seminar: Working in a Vacuum - 20 Years of Control for Space Applications 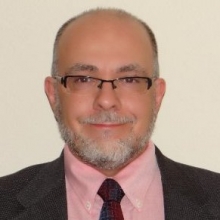 Abstract: Erwin will provide a short summary of the control systems projects he has worked on over the past 20 years at the Air Force Research Laboratory to provide perspective on how control systems theory and techniques have been/are being transitioned and applied to a number of problems faced by the Air Force and the government in general.  The briefing will touch on (a) the use of active control for vibration and jitter suppression in precision pointing applications (late 1990s) (b) multivariable & adaptive control techniques for positioning, phasing and controlling the vibration of large deployable space telescopes (early 2000s), (c) hybrid control algorithms developed for space-based cognitive radio communications (mid 2000s), (d) techniques for distributed estimation and sensor network management applied to the problem of tracking the global population of space objects (2010s), and finally (e) current research efforts related to model-predictive and hybrid control design for inspection spacecraft.

Bio: R. Scott Erwin received a B. S. in aeronautical engineering from Rensselaer Polytechnic Institute in 1991, and the M. S. and Ph.D. degrees in aerospace engineering from the University of Michigan in 1993 and 1997, respectively. He has been an employee of the Air Force Research Laboratory, Space Vehicles Directorate (AFRL/RV) located at Kirtland AFB, NM, from 1997 to the present.  He is currently the program manager for the Guidance, Navigation and Control Program within Space Vehicles Directorate. Erwin is an Associate Fellow of AIAA and a senior member of IEEE, and has authored or co-authored over 100 technical publications in the areas of spacecraft dynamic, controls and communications.  He was recently selected as the recipient of the 2016 IEEE Judith A. Resnick Space Award for “for outstanding contributions to spacecraft vibration isolation technologies and ultra-precision pointing of large flexible space platforms.”  His current research interests are autonomous spacecraft and the interplay between communications, estimation and control in autonomous, networked multi-spacecraft systems.