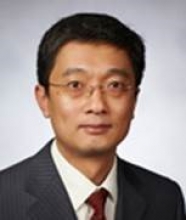 Abstract: Due to low construction cost and architectural versatility, reinforced concrete flat plate is a structural system widely used for office and hotel buildings in the U.S. However, flat plate is prone to slab-punching failure in the vicinity of columns, which can progressively lead to a disproportionate structural failure. Moreover, flat plates designed prior to the 1980s lack slab bottom reinforcement continuous through the columns, which is needed to maintain structural integrity following a local punching failure. This presentation provides experimental and analytical results regarding the progressive collapse resistance of older flat-plate structures subjected to sudden loss of an exterior or interior column in abnormal loading events. The analytical study developed a macromodel for system-level nonlinear simulations of flat plates. The model was validated by 24 large-scale experiments of slab-column subassemblies under three types of static loading conditions. The model was then applied to a multistory prototype flat-plate building. The simulations indicated that older flat plates experiencing instantaneous removal of a supporting column are highly vulnerable to progressive collapse. The analyses also examined the effects of compressive membrane action and strain rate on the dynamic response of slab, and the effectiveness of an energy-based equivalent nonlinear static analysis approach. The experimental program consisted of testing both isolated slab-column connections and multipanel flat-plate substructures. The isolated connection tests studied the effects of in-plane restraints on punching resistance and examined the post-punching load-carrying capacity. The tests carried out on multipanel specimens studied the dynamic response triggered by sudden removal of an interior and exterior column. The tests indicated that, if the gravity load acting on the slab is greater than 40 percent of design loading capacity of the intact structure, a progressive collapse will likely result due to the sudden loss of a support. The tests also examined the compressive membrane action in slab, identified strain rate of materials and confirmed the effectiveness of the macromodel when used for dynamic loading circumstances.

Bio: Ying Tian is currently an associate professor in the Department of Civil and Environmental Engineering and Construction at the University of Nevada, Las Vegas. He obtained his doctorate from the University of Texas at Austin in 2007. His research has focused mainly on the behavior, design and rehabilitation of reinforced concrete structures under earthquakes and extreme loading events not considered in a normal design, such as sudden loss of a structural component and elevated temperature induced by uncontrolled fire. Tian is a member of the ACI Committee 377, Performance-Based Structural Integrity & Resilience of Concrete Structures, Joint ACI/ASCE Committee 421, Design of Reinforced Concrete Slabs, and ASCE/SEI Mitigation of Disproportionate Collapse Potential Standard Committee.