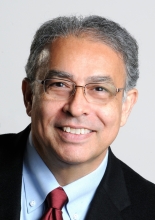 Abstract:  Yousef Bozorgnia will give an overview of major research projects coordinated at the Pacific Earthquake Engineering Research Center (PEER), University of California. These include a set of NGA projects, which are multidisciplinary earthquake ground-motion hazards in the Western U.S., Central & Eastern U.S. and subduction regions. Other ongoing research projects include seismic performance of lifelines, performance of residential buildings in California and development of structural design guidelines for tsunami loads.

Bio:  Yousef Bozorgnia is professor In residence at the Department of Civil and Environmental Engineering, University of California, Berkeley. He is also the executive director of the Pacific Earthquake Engineering Research Center (PEER), a consortium of 10 universities on the West Coast.

Professor Bozorgnia has over 34 years of experience in earthquake engineering, ranging from probabilistic analysis of ground-motion hazard, seismic performance of lifelines, performance-based seismic design of buildings, to seismic performance of power plants. He is the author of numerous well-cited publications and co-developer of an earthquake ground-motion model that is used extensively worldwide for seismic analysis and design of a wide range of facilities. In 2004, Bozorgnia and Professor Bertero edited an 1100-page book titled “Earthquake Engineering: From engineering seismology to performance-based engineering,” which has been the text of graduate-level courses at various universities.

Bozorgnia is a licensed professional civil engineer (PE) in California and has been a Fellow of the American Society of Civil Engineers (ASCE) since 1998. He is also currently the associate editor of Earthquake Spectra, a scientific journal dedicated to earthquake engineering.