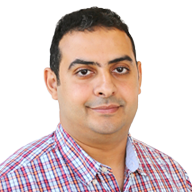 Yasser Shoukry received his Ph.D. in electrical engineering from the University of California, Los Angeles in 2015, where he was affiliated with both the Cyber-Physical Systems Lab and Networked and Embedded Systems Lab. He received an M.Sc. and B.Sc. degrees (with distinction and honors) in computer and systems engineering from Ain Shams University, Cairo, Egypt in 2010 and 2007, respectively. Between September 2015 and July 2017, Shoukry was a joint postdoctoral associate at UC Berkeley, UCLA and the University of Pennsylvania. Before pursuing his Ph.D. at UCLA, he spent four years as an R&D engineer in the automotive embedded systems industry. In 2017, Shoukry became an assistant professor of electrical and computer engineering at the University of Maryland, College Park. He joined the UC Irvine Department of Electrical Engineering and Computer Science in October 2019. He is the recipient of the NSF CAREER Award (2019), the Best Demo Award from the International Conference on Information Processing in Sensor Networks (IPSN) in 2017, the Best Paper Award from the International Conference on Cyber-Physical Systems (ICCPS) in 2016, and the Distinguished Dissertation Award from UCLA EE department in 2016. In 2015, he led the UCLA/Caltech/CMU team to win the NSF Early Career Investigators (NSF-ECI) research challenge. His team represented the NSF- ECI in the NIST Global Cities Technology Challenge, an initiative designed to advance the deployment of Internet of Things (IoT) technologies within a smart city. He is also the recipient of the 2019 George Corcoran Memorial Award for his contributions to teaching and educational leadership in the field of CPS and IoT.