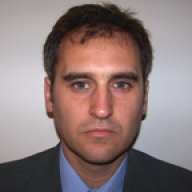 Gamero-Castaño’s main research interest is colloidal propulsion, an electric propulsion technology for precision formation flying and small spacecraft. He joined Busek Co Inc., in Massachusetts in 1999 as a research scientist, where he developed and directed the company’s colloid thruster program. Gamero-Castaño joined the Jet Propulsion Laboratory in 2004 as a senior engineer, where he worked on colloidal technology for the Disturbance Reduction System-Space Technology 7 and the Laser Interferometer Space Antenna missions.

Other research areas of interest include the modeling of stationary plasma hall thrusters; the development of aerosol diagnostic techniques; and the study of a variety of phenomena associated with the electrospraying of liquids.