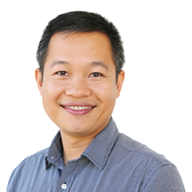 Hung Cao received his B.Sc. degree in electronics and telecommunications from Hanoi University of Science and Technology, Vietnam in 2003. He then served as a lecturer at Vietnam Maritime University from 2003 to 2005. He earned an M.Sc. and Ph.D. in electrical engineering from the University of Texas at Arlington in 2007 and 2012, respectively. After his Ph.D. study on biosensors and bioelectronics, Cao received training in bioengineering and medicine at University of Southern California (2012-2013) and University of California, Los Angeles (2013-2014). In 2014-2015, he worked for ETS, Montreal, QC, Canada as a research faculty. In fall 2015, Cao became an assistant professor of electrical/biomedical engineering at University of Washington (UW). Cao joined the UC Irvine Department of Electrical Engineering and Computer Science in September 2018. His HERO lab focuses on the applications of micro- bio-sensors and bioelectronics for health monitoring in humans as well as biological studies in animal models. Cao is one of the pioneers in utilizing flexible microelectronics to study heart disease in zebrafish. He is a recipient of the UW’s RRF Award (2016), the NSF CAREER Award (2017) and one of the only two nominees under UW competing for the prestigious Moore’s Inventor Fellowship (2017).