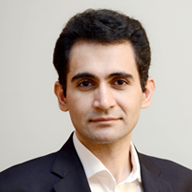 Hamidreza Aghasi received the B.Sc. degree in electrical engineering from Sharif University of Technology, Tehran, Iran, in 2011 and the M.S. and Ph.D. degrees in electrical engineering from Cornell University in 2015 and 2017, respectively. In summer 2014, he was an intern with Samsung Research America Display lab, in San Jose, California. From 2017 to 2018 he was a postdoctoral research fellow at University of Michigan, and from 2018 to 2019, he was a mm-wave research scientist at Acacia Communications Inc. He is currently an assistant professor in the electrical engineering and computer science department at UC Irvine. His current research interests are mm-wave and terahertz electronics for applications in communication, biomedical imaging and molecular spectroscopy.

Aghasi is a member of IEEE Solid-State Circuits society and IEEE Microwave Theory and Techniques society. He received the Cornell graduate fellowship in 2011, Jacobs Fellowship in 2012, Cornell ECE Innovation Award in 2013, and the Cornell Scale up and Prototyping award in 2017. He was selected as the author of “Article of the Month” by IEEE Transactions on Nanotechnology in June 2016 and is a co-recipient of the 2019 Best Invited Paper Award at the IEEE Custom Integrated Circuit Conference (CICC).