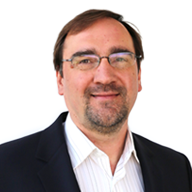 Andrei M. Shkel has been on the faculty at UC Irvine since 2000. From 2009 to 2013, he was on leave from academia, serving as a program manager in the Microsystems Technology Office of the Defense Advanced Research Projects Agency (DARPA). Shkel has been on a number of editorial boards, most recently as editor of the IEEE/ASME Journal of Micro-Electro-Mechanical Systems (JMEMS) and Journal of Gyroscopy and Navigation. He serves as the founding chair of the IEEE Inertial Sensors (INERTIAL). Shkel was awarded the 2013 Office of the Secretary of Defense Medal for Exceptional Public Service, the 2009 IEEE Sensors Council Technical Achievement Award, and the 2005 NSF CAREER award. He is also the recipient of the Samueli School of Engineering Innovator of the Year Award (2020) and Research Achievement Award (2009). His professional interests, reflected in over 250 publications, three books, and 41 U.S. Patents, include high-performance inertial sensors, micro-electro-mechanical systems (MEMS), and implantable vestibular prosthetics. Shkel is a fellow of IEEE and president of the IEEE Sensors Council (2020-2021).