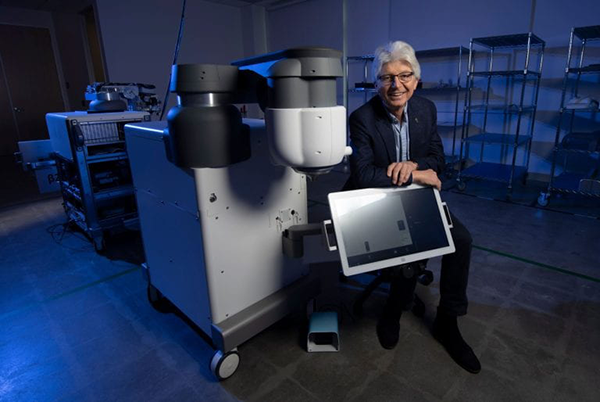 Jan. 23, 2023 - This golden goose is no fairy tale. It’s the real-life story of a freak laboratory accident that led to the invention of a device that has improved the eyesight of millions.

The plot begins in 1993 in Michigan, where a weary grad student absent-mindedly removed his goggles while adjusting the mirrors of an experimental laser and had a stray beam zap his retina. The doctor who examined his eye was astonished by the perfectly circular, pinpoint burns, which were unlike anything then produced by conventional lasers.

Curious, the doctor visited the lab and soon began working with the University of Michigan research team – led by French physicist Gerard Mourou – to see if the so-called femtosecond laser, which employs ultrashort pulses, could be used for medical purposes.

In 1994, the doctor – Ron Kurtz – and the grad student presented their findings at an optics conference in Toronto, where they ran into Tibor Juhasz, a former UCI physics postdoc who was testing picosecond lasers for eye surgery. Coincidentally, Juhasz, who was born and educated in Hungary, had worked for Mourou a few years earlier. Shortly after the conference, Mourou invited Juhasz to join his team in Michigan.

There, Juhasz and Kurtz developed a shoebox-sized femtosecond machine to perform “bladeless” LASIK cornea surgery to correct poor vision. “People in the industry were initially very skeptical that the concept would work,” Juhasz recalls. “It was extremely discouraging, but we kept going.”

In 1997, he and Kurtz founded IntraLase to commercialize their device, which has helped more than 30 million people. In 2004, they moved the company to Irvine, where Juhasz became a professor of ophthalmology and biomedical engineering at UCI.

Late last year, the Michigan lab mishap and its silver lining resulted in Golden Goose Awards for five people: Juhasz, Kurtz, Detao Du (the grad student whose retina got zapped), and femtosecond laser inventors Mourou and Donna Strickland. (Mourou and Strickland won a Nobel Prize for their work in 2018.) 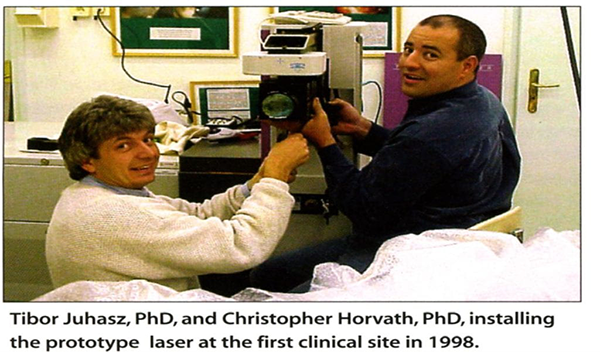 The Golden Goose Awards were launched in 2012, partly as a retort to former U.S. Sen. William Proxmire’s Golden Fleece Awards, which derided wasteful federal spending, often involving scientific research that sounded wacky or arcane, such as a study that compared the aggressiveness of sunfish intoxicated with tequila versus gin.

Golden Goose officials say that Proxmire’s awards reflected a “fundamental misunderstanding of how science works and how such research can turn out to be extremely important regardless of whether it makes sense to nonscientists. … The nature of scientific research is that its impact is hard to predict.”

Sponsored by the American Association for the Advancement of Science, the annual Golden Goose ceremony highlights “the often unexpected or serendipitous nature of basic scientific research by honoring federally funded researchers whose work may once have been viewed as unusual, odd or obscure but has produced important discoveries benefiting society in significant ways,” according to a 2012 press release.

Juhasz notes that it took several years for femtosecond laser eye surgery to catch on. The turning point, he says, came in 2006, after a U.S. Navy study concluded that military pilots who underwent the procedure recovered faster and had better vision than those who had conventional operations.

A year later, IntraLase was sold to a medical optics firm for $808 million. Juhasz and Kurtz went on to develop femtosecond surgery for cataracts. And Juhasz’s newest venture, a UCI spinoff called ViaLase Inc., is conducting clinical trials to noninvasively treat glaucoma with femtosecond beams. He expects the technology to become available in two to five years.

If you want to learn more about supporting this or other activities at UCI, please visit the Brilliant Future website at https://brilliantfuture.uci.edu. Publicly launched on Oct. 4, 2019, the Brilliant Future campaign aims to raise awareness and support for UCI. By engaging 75,000 alumni and garnering $2 billion in philanthropic investment, UCI seeks to reach new heights of excellence in student success, health and wellness, research and more. The Henry Samueli School of Engineering and the School of Medicine play a vital role in the success of the campaign. Learn more by visiting https://brilliantfuture.uci.edu/areas-to-support.