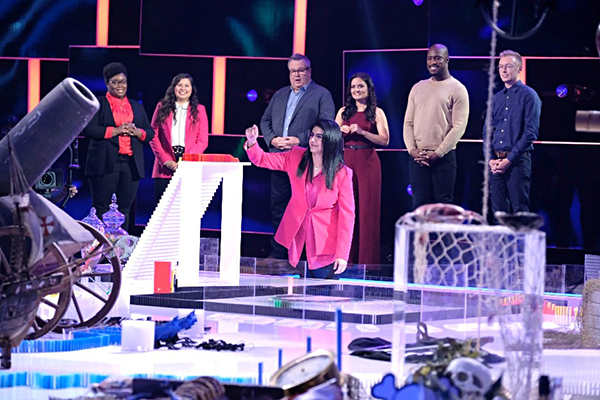 In each episode of the show, contestants are given a theme and must create a domino topple while incorporating chain reaction elements, also known as kluges or Rube Goldberg machines.

Bajwa and her team are featured in the fourth episode titled “Movie Night.” The team centered their build around the theme of fantasy movies. One of the required elements of the challenge was to reenact an iconic movie scene in the chain reaction part of the build. “Wonder Women’s” entry paid tribute to one of Bajwa’s favorite movies, “Pirates of the Caribbean,” which replicated the moment in “At World’s End” where the crew of the Black Pearl flipped the ship upside down to return to the world of the living.

A casting scout for “Domino Masters” had reached out to Bajwa due to her previous experience at Synn Labs working on the chain reaction in “The Athlete Machine,” a marketing video for Red Bull. The life-size kluge went viral in 2012 for its combination of machinery and extreme sports, by incorporating real-life athletes showing off their skills as linkages within the machine. 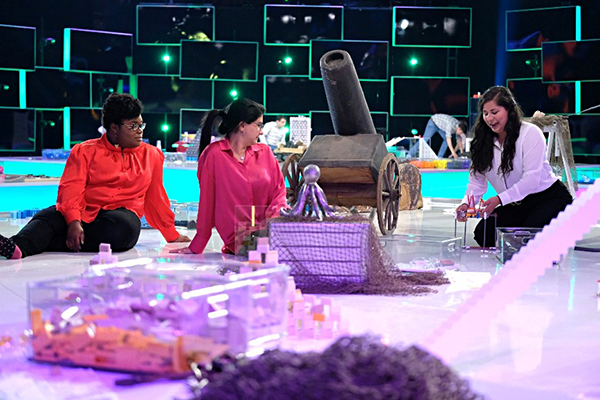 Each member of “Wonder Women” possesses an engineering background with experience in the aerospace industry, which proved useful in the chain reaction and project management aspects of the competition. The team used math for timing — they had to calculate how many dominos were required in the backup line so that it wouldn’t get ahead of the main line and prematurely trigger the next section of the topple. Physics and Newton’s laws of motion were considered when friction, momentum or weight were critical factors in a given area. The spacing of the dominos and the curvature of the domino lines were important because if the dominos were spaced incorrectly or set up to curve too tightly, they would lose speed and possibly not have enough momentum to trigger the next reaction. Additionally, if a ball rolled down a curved ramp too quickly, it could take the turn too fast causing it to fly off the ramp and miss its target.

Bajwa’s exposure to STEM started when she was very young, growing up watching her grandfather, an electrical engineer, and her great grandfather, a mechanical engineer, tinkering with their tools, and repairing or modifying things around the house. If something wasn’t working or needed a retrofit, Bajwa was encouraged to find a creative solution rather than toss it away.

Inspired by her grandfather and great grandfather, Bajwa decided to pursue engineering at UCI. Undecided between electrical and mechanical engineering, she ended up customizing her own electromechanical major with the support of a faculty adviser.

“I was able to merge two disciplines that traditionally weren't merged together,” Bajwa said. “ I could see the similarities between the theories and laws behind electrical engineering with those of mechanical engineering. The formulas are almost the same, it's just, are we talking about electron movement or mechanical movement? So, it was a very unique experience in that sense. It created an interesting niche for me because after graduation, it opened up opportunities in robotics and aerospace — basically, anywhere you wanted to design a machine and electrically power it.” 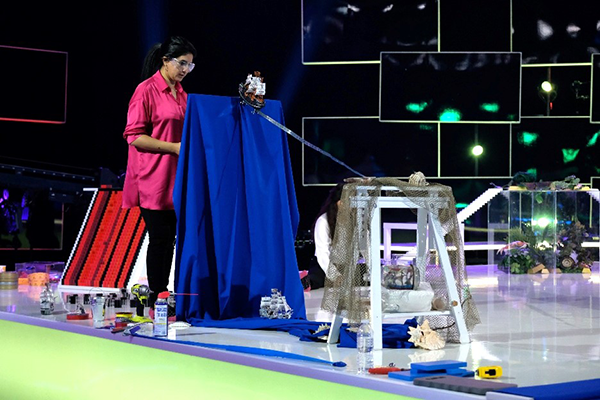 Bajwa was a member of the Society of Women Engineers (SWE) while attending UCI. Not only did SWE provide Bajwa with resources and connections to other female engineers, but it also exposed her to career opportunities. She secured her first full-time job as an electromechanical project engineer through contacts made at one of SWE’s networking nights.

Her UCI memories include seeing the Dalai Lama and archeologist/Egyptologist Zahi Hawass speaking on campus, lugging her physics books across Aldrich Park to get to class, and connecting with fellow members of the Muslim Student Union (MSU). Bajwa’s favorite memory from her time in the School of Engineering is winning first place in a 3D modeling project competition for her Unigraphics (computer-aided design/manufacturing/engineering) class. Students could design anything of their choosing using the skills they learned throughout the quarter, and at the suggestion of a classmate, Bajwa modeled a hookah. The winner was decided by the instructor’s coworkers at the golf club design and manufacturing company where he worked.

“I remember this very well because there was a lesson in the end,” Bajwa said. “I found out that one of my classmates was very upset because he approached his project very literally. He went and pulled up blueprints of an actual old Russian battleship and modeled it to scale. And, if I remember correctly, gave the whole ship a very generic gray color. My project won over his because I paid attention to who my audience was. We were told in advance that our instructor’s coworkers would be judging the final projects. So, knowing this, I realized that the judging criteria wasn’t on which project was the most to scale or the most technically sound — my hookah design was purely original. I knew they’d be looking at what was most eye-catching, —something colorful and artistic. The lesson was, always know your audience so you can connect with them.”

The first place prize was a real golf club. Bajwa has only ever played mini golf, but keeps her golf club as a trophy and reminder of this lesson.

After graduating with her bachelor’s degree, Bajwa spent approximately 15 years in the aerospace industry, working her way from project engineer to engineering manager. Currently, she’s challenging herself by stepping away from what’s familiar and becoming a project manager in the electrical engineering industry.

In addition to being the show’s only all-female team consisting of professional engineers, “Wonder Women” was composed of all women of color.

“I’m very blessed to have had this experience,” Bajwa said. “Sitting on our platform in the domino arena, wearing polka-dotted socks, and basically playing with dominoes while being filmed for national TV… it's so unbelievably surreal! And on top of that, the show highlighting me as a female engineer, and as part of a diversity team, it heightened my awareness that every time I stepped onto our platform, I was taking on an additional important title: role model. I’m a half Egyptian, half Pakistani Muslim female “enginerd.” So, visualizing the young viewers out there on the other side of the camera, watching and saying, ‘Hey, she’s like me! I could do that one day!’ was such a big honor and privilege.”