Q & A with Alumna Cecilia Richards ‘90 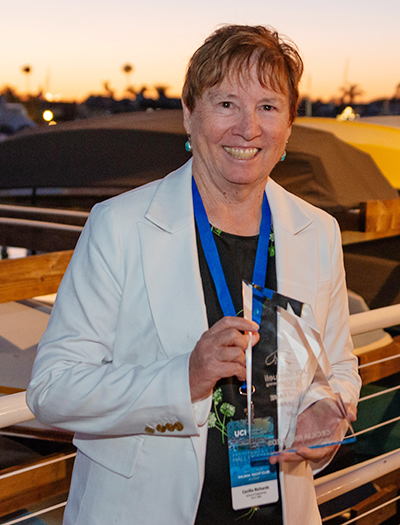 Aug. 23, 2022 - A mechanical engineering professor at Washington State University and a fellow of the American Society of Mechanical Engineers, Cecilia Richards has led innovations inside and outside of the classroom. She is a pioneer in the development of small-scale engines, namely the integration of piezoelectric material into the experimental “P3” micro engine. Her work on scaling down engines helped further research on the power conversion efficiency of piezoelectric components. Richards received her bachelor’s and master’s degrees in mechanical engineering from the University of British Columbia and went on to earn her doctorate at UC Irvine in 1990. Richards was inducted into the Samueli School’s 2022 Engineering Hall of Fame. Now retired, she looks back on her time as an Anteater and all that she has accomplished.

“Sometimes I'm just amazed, but I just hope that it shows other women that this is possible. We need more women in mechanical engineering,” says Richards about being the first woman in the UCI Department of Mechanical Engineering to earn a doctorate, as well as being the first woman to serve on the faculty of the School of Mechanical and Materials Engineering at Washington State University.

Why did you decide to become an engineer?

I originally started in math. After I graduated, I started working for some engineering professors on solar energy. I really liked the work and realized that I could do it. Up until then, I thought that mechanical engineering was only about gears and linkages.

Why did you choose UCI to further your education?

I chose UCI for my graduate education because I was really excited about the research that Professor Scott Samuelsen (professor emeritus of mechanical and aerospace engineering) was doing in the UCI Combustion Lab at the time. When I came for a visit, I found I really liked the students and staff in the lab.

Who were your mentors at UCI and how did they impact you?

Professor Samuelsen was my adviser and mentor. He helped me develop and grow both as a professional and an academic. He helped me learn how to conduct research, write scholarly papers and interact with colleagues.

At UCI, I worked on how fuel and air mix in gas turbine engines. We were interested in how pollutants formed and how to reduce them. After I left UCI, I went to the National Institute of Standards and Technology for two years of postdoctoral work. While there, I continued to work on fuel and air mixing. When I went to Washington State University as a faculty member, I continued this work for a few years. At that time, I was focused on how liquid droplets of fuel get transported by the combustion air.

Then I started to get interested in small-scale engines. The problems were really different, challenging and interesting. We began working on developing engines that could produce electrical power that were micro-sized. At first, I tried to incorporate a combustor into the engine. However, eventually, in the interest of efficiency and manufacturability, we used waste heat to power the engine. The resulting engine was about a 10-millimeter cube, made primarily of silicon, using microfabrication techniques. The engine consisted of a two-phase fluid contained in a cavity between two membranes, one of which was a thin film of piezoelectric material. A thermal switch transferred heat from the waste heat source. The expansion of the fluid in the membrane cavity strained the piezoelectric membrane, which produced electric power. We called this engine the P3.

What have been some of your contributions as a leading engineering educator?

I developed several remote labs on thermal fluid measurement systems for students on our branch campuses who did not have access to the lab equipment on campus. The labs could be viewed and controlled from off site. I developed and incorporated active learning in many of my classes. I also worked with a group of engineering educators to study and document how well some of the active learning modules worked. Outside of the classroom, I developed and ran a National Science Foundation Research for Undergraduates program with a theme of multiscale engineering at WSU for several years.

What has been your proudest moment as an engineer?

There have been so many great moments. I really enjoyed all of the research I was involved in, especially the development of the P3 engine. I am also proud of all the students who worked with me and went on to successful careers of their own.

Any favorite memories from your Anteater days?

Playing softball during the summer with my labmates and meeting my husband.

Do you have any advice for other Anteater engineers?

Study hard and take advantage of all that UCI has to offer.