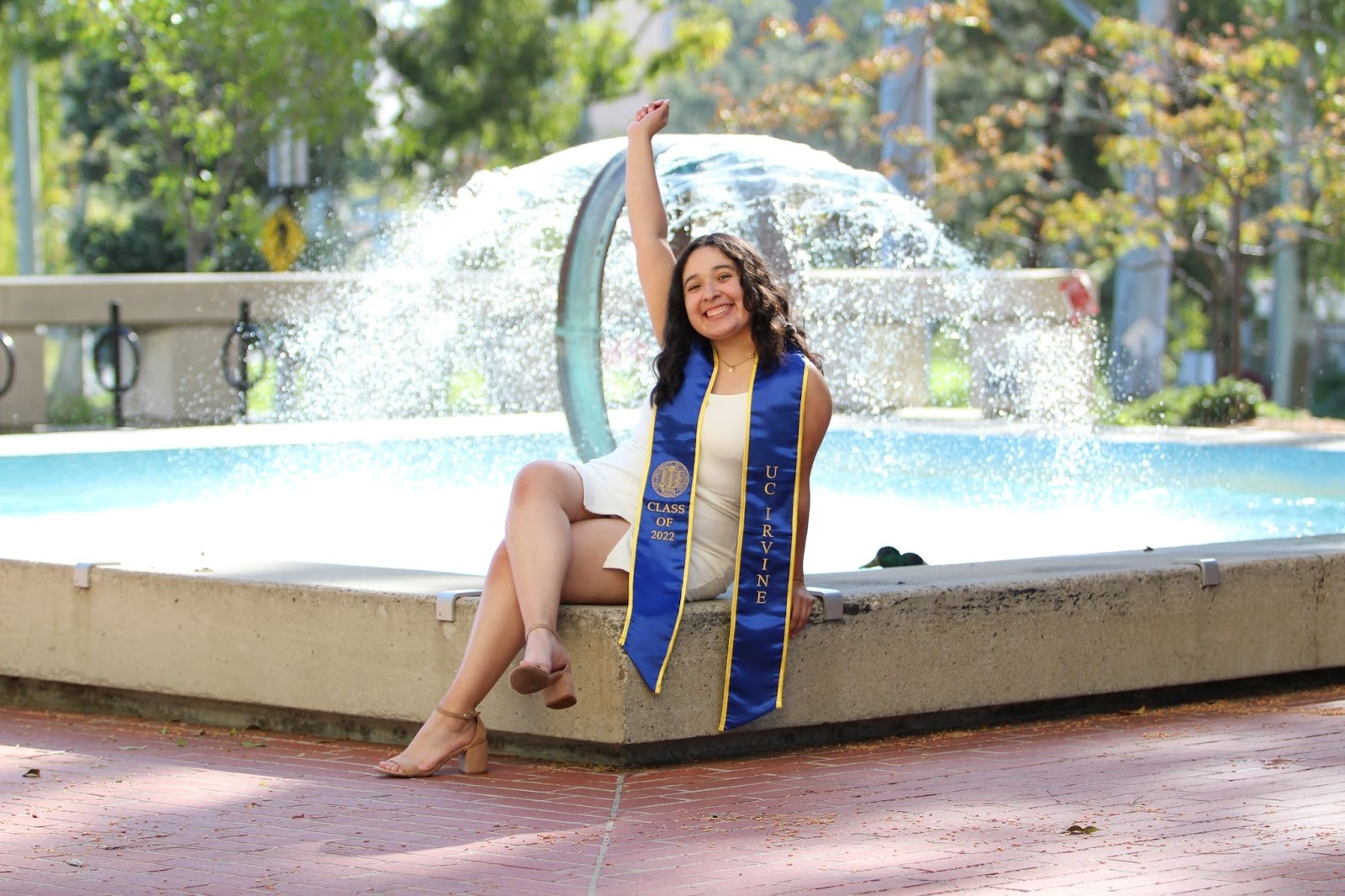 June 9, 2022 - A. Lili Castillo, a fourth-year mechanical engineering major, has been selected as the student speaker for the UC Irvine Samueli School of Engineering’s Commencement Ceremony on June 12.

The themes in her speech closely relate to identity and how she has found her pathway as an engineer. Being a first-generation college student, Castillo has overcome several obstacles to get to where she is today.

Castillo was raised by a single mother who immigrated from Mexico and works as a house cleaner. From a young age, Castillo stepped up as a translator and helped her mother with managing finances. Castillo and her family spent around five years living in someone else’s garage to cut rental costs until they were able to move into a new home and stabilize financially. During that time, they earned extra income by cleaning their church’s restrooms and collecting recyclable bottles in order to afford the new expenses.

When it came time for applying to college, Castillo found herself navigating the complexities of filling out the Free Application for Federal Student Aid (FAFSA) on her own.

“I see how higher education provides an opportunity for people of low socioeconomic status to rise up to a different tax bracket or different lifestyle, which I think is something my mom has really pushed for,” said Castillo. "Two of the big reasons she has been an advocate for higher education was knowledge and financial stability. I think with being an engineering major, I've seen opportunities for both. As I complete my studies and get my own professional job, I hope to give back to my mom.”

What initially drew Castillo to UCI was a high school field trip. She attended San Marcos High School at the time and through the Advancement Via Individual Determination Program, visited the campus in person. Besides the financial aid, Castillo liked UCI for its engineering program.

Castillo realized she wanted to major in engineering as a junior in high school during a tour of a spine realignment company where she met a female engineer who told her about the need for more women in the field.

Prior to enrolling, she wasn’t aware that UCI was a Hispanic-Serving Institute, meaning at least 25% of full-time undergraduate students are Hispanic or Latino. This opened up a wide set of resources, including programs geared toward first-generation students like herself such as TRIO Scholars and the Student Achievement Guided by Experience (SAGE) Scholars. These groups provided her with a sense of community with those who have undergone similar obstacles, coming from immigrant families or single-parent households.

Reflecting on her favorite experiences at UCI, many come from her time serving as president of the Society of Women Engineers (SWE) at UCI for the 2020-2021 school year.  Participating in outreach events and working with young girls was especially fulfilling for her.

Castillo recently received a Graduate Research Fellowship Program award from the National Science Foundation for her research on engineering identity formation, which was conducted under the advisement of Allison Godwin from Purdue University’s School of Engineering. She will be speaking at the 2022 American Society for Engineering Educating Annual Conference and Exposition in Minneapolis, Minnesota, from June 26-29 to present the results of her research to an audience of engineering educators and leading researchers in the field.

Following graduation, Castillo will pursue a doctorate in engineering education at Arizona State University where she will continue her current research in identity formation, specifically in Latino/a/x and first-generation students, and how institutions can create a welcoming environment to better support diverse students.

“These have been great milestones for myself and it’s super validating feeling like people believe in me and see a vision of who I can be that they are willing to invest in. That has been  mind-boggling because I just see myself as ‘little Lili,’ but people see how passionate and driven I am, which is remarkable,” said Castillo.

For other first-generation students who may be experiencing feelings of imposter syndrome, Castillo offers a quote she heard at student orientation during her freshman year. It has stuck with her since the beginning of her college career: “I hope you all know that you're all meant to be here because even when you don't believe in yourself, someone else did. Someone believed that you could be successful not only at UCI, but also as an engineering major, which is why you were accepted in this major.”

The commencement will take place at the Bren Events Center and begin at 12:45 p.m. In addition to Castillo, the featured guest speaker will be UCI alumnus Johnny Lincoln ’04 (M.S.), ’07 (Ph.D.), founder of The Lincoln Dynamic Foundation.