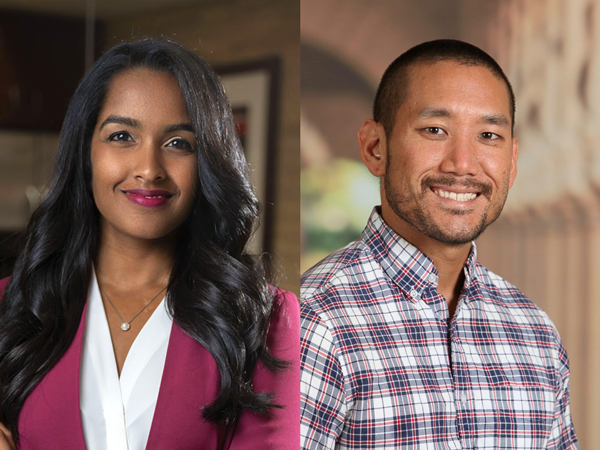 May 18, 2022 – Sitara Nayudu ’11 earned a bachelor’s degree in environmental engineering. Her passion for UC Irvine and the Samueli School of Engineering community have fueled her since her days as a student.

While an undergraduate, Nayudu served as president of the Associated Students of UCI, and she was selected to be the first ever student to sit on the UCI Foundation Board of Trustees. After graduating, she founded the UCI Engineering Alumni Society and was a founding member of the UCI Alumni Association’s Young Alumni Council. Nayudu also sat on the UCI Alumni Association Board of Directors, where she worked to connect classmates and mentors at UCI with her growing network in the technology industry, providing career advice and opportunities for graduating students.

Nayudu works in the technology industry, where her engineering expertise, energy and dynamism have enabled her to function as a bridge between people, ideas and product. Nayudu was an early employee at Ring, the video doorbell company, and she helped position the company for its sale to Amazon. Nayudu now has a position on the Amazon Devices – Accessibility team, working to ensure that Amazon devices are functional and beneficial to customers with a wide range of accessibility needs. Her team recently announced the launch of an Amazon Fire TV Cube streaming device that is compatible with hearing aids over Bluetooth.

Nayudu says she has been inspired by the values of her Indian culture to give back to the community, citing the excellent mentorship she has received from older AAPI engineering alumni. While at UCI, she joined a few local groups focused on traditional Hindu practices of yoga and breathing, which helped her connect to her culture. From her volunteer work with AAPI women in STEM, to helping with tsunami relief efforts in South Asia and learning engineering practices in India, to her work on the accessibility, localization and internationalization portfolios at Amazon, Nayudu credits her cultural background and values as the source of her career passions.

Satoshi Suga ’08 earned his bachelor’s degree in electrical engineering and computer science. While a student in the Samueli School, he revived the UCI chapter of the IEEE (Institute of Electrical and Electronics Engineers), and he still actively supports the group, following their stories on social media. He also was a part of IEEE Eta Kappa Nu, IEEE’s international honor society, and served on the school’s Engineering Student Council. In his final year at UCI, he received the Engineer of the Year Award from ESC.

After working in broadcast engineering for several years after graduation, Suga began volunteering at a family center in Los Angeles, which sent him down a new path of teaching engineering to high school students, primarily in underprivileged districts. While enrolled in the Stanford Teacher Education Program, Suga started tutoring students living on the San Francisco Peninsula, and he was particularly struck by the difference in preparation that these well-resourced students received compared to his own experience. He was motivated to give underprivileged students the same college preparation that was available to their more resourced future classmates, thereby paving the way for them to succeed in college without the self-doubt that he had struggled with.

He was inspired to leverage his network in the Bay Area to support highly motivated students and teachers facing a lack of resources, and, alongside his job teaching physics and engineering at a high school in West Oakland and a local community college, Suga started his own limited liability company called the Trusted Network of Teachers. This organization connects teachers like him, who work in underprivileged districts, with tutoring positions that can, in turn, allow the teachers to better provide for their students and classrooms. His goal, Suga says, is to help teachers offer the best college preparatory resources to all of their students. This is part of Suga’s dedication to “democratizing opportunity in this country” through local community work.