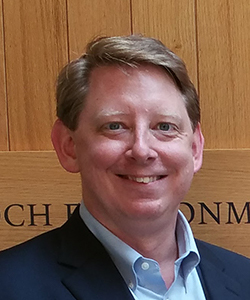 Burke is developing an engineered electronic nose that can “smell” chemicals and determine what kind of chemicals they are. Each nose will smell only one kind of chemical. The chemicals could be anything that natural noses can detect, such as dynamite, drugs, viruses, toxic chemicals, etc. Receptors from biological noses will be attached to tiny electrical sensors. This technique lays the groundwork for developing high precision chemical detection in general, which can be utilized in a variety of applications requiring high precision process control (i.e., advanced manufacturing). Since the sensor is electronic, it could be integrated into a massively parallel electronic nose system with signal recognition based on hundreds of different sensors onto one chip. An educational outreach program to share the technology will be implemented, designed to reach K-12 educationally disadvantaged students from local neighborhoods.