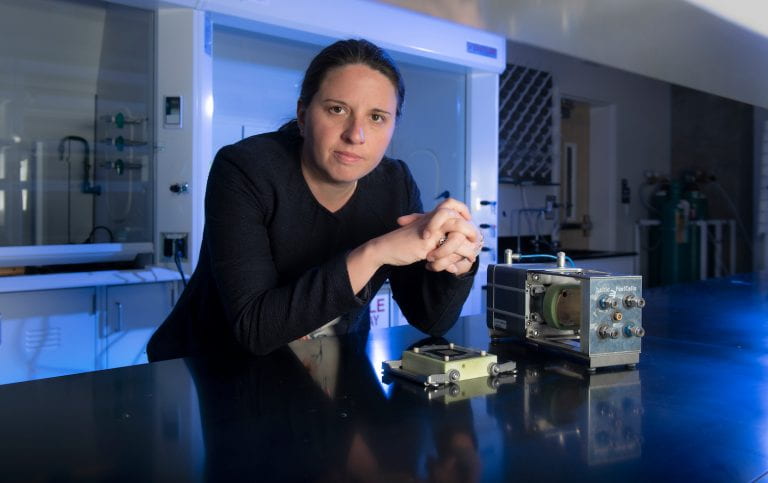 March 16, 2022 - Iryna Zenyuk’s research puts her on the front lines of a campaign to transition the world’s energy economy away from fossil fuels and toward clean, renewable resources. Now the Ukrainian American scientist and UCI engineer has taken on a new role organizing campus efforts to provide a safe place for refugees fleeing danger in the nation of her birth.

Zenyuk says she has become increasingly concerned for the safety and well-being of Ukraine’s scientists and academics since Russia began its large-scale military invasion of the country in late February. Instead of helplessly watching the horrors of war unfold on her TV screen, she decided to launch a program to bring Ukrainian university faculty to UCI and, potentially, other University of California campuses.

“It’s a sad situation, and I’m very angry about this Russian war against a sovereign nation,” Zenyuk says. “I went back this past August to visit Kyiv because it was the 30th birthday of Ukrainian independence, so I had the last chance to see the city as it was before all the bombing and destruction and human casualties.”

For the UCI engineer, who is associate director of the campus’s National Fuel Cell Research Center and leads a 30-member group, the conflict in Ukraine is personal.

“I have family in Ukraine, including an aunt in Kharkiv, where there has been a lot of action,” says Zenyuk, who was born in the western Ukraine city of Ivano-Frankivsk. “My cousin is hiding out in a basement, getting shelled for hours each day. She had to leave her husband, who is with his parents in a town that is occupied by Russian forces.”

She says that as Ukraine’s capital, Kyiv, and second-largest city, Kharkiv, are coming under heavy bombardment, the nation’s educational infrastructure is taking a direct hit.

“The best universities are in Kyiv and Kharkiv, and those cities are being bombed the most,” Zenyuk says. “That’s why I am trying to do something for Ukrainian scientists and academics – to bring them, at least temporarily, to U.S. research labs, specifically here to UCI.”

She sought and received advice on how to get started from the chair of a UC-wide coordinating committee for Scholars at Risk, Jane O. Newman, UCI professor of comparative literature. UCI SAR, established in 2017, has enabled displaced academic researchers from Afghanistan, Cameroon and Turkey to come to work on the UCI campus. Using SAR as a template, Zenyuk began by addressing financing.

A meeting with Pramod Khargonekar, UCI vice chancellor for research, resulted in an initial infusion of $25,000, with the potential for matching funds from other campus sources, including the deans of various schools. The UCI Foundation approved the UCI Ukraine Emergency Response Fund to solicit donations from the public. As of mid-March, that site had received more than $15,000 toward a goal of $100,000.

With financing moving apace, Zenyuk started looking into procedures to enable Ukrainian scholars to come to Irvine with their families. She connected with Diane O’Dowd, vice provost for academic personnel, who is helping to arrange appointments in various UCI departments. Among a host of administrative issues, the new program will need to help obtain visas for the refugees.

Zenyuk also met recently with officials in the UC Office of the President and urged that displaced scholar programs be launched throughout the 10-campus system. In addition, she has traveled to the Ukrainian diaspora communities of New York and Los Angeles to generate support.

“There is no centralized office to do this, so it’s up to individual faculty to initiate such efforts,” says Zenyuk, an associate professor of chemical and biomolecular engineering who also holds an appointment in mechanical and aerospace engineering. “I am an engineer, but this program is open to all different kinds of faculty, including those in the humanities. We just want to bring them over here to safety.”

Newman, whose work has resulted in several Afghan scholars finding safe passage to the United States to come and work at UCI, says she told Zenyuk to prepare for “the long haul.”

“There is a lot of work involved in moving families here, getting them settled, arranging for healthcare, children’s education, English lessons, among many other needs,” Newman says. “We are hoping that Scholars at Risk will become a formal, institutionalized function within the UC system, because I feel we will continue to see the need to help refugees impacted by future armed conflicts and other causes, including climate change.”

As a leading educator and expert in renewable energy technologies – including fuel cells, hydrogen electrochemistry and electrolyzers – Zenyuk says she can’t fail to see the connection between her work and broader geopolitical strife occurring throughout the world, sometimes too close to home.

“I feel like this war has presented a major setback toward us reaching our net-zero emission goals,” she says. “But I hope the war ends soon and that countries will use this opportunity to transition faster to renewable energy to shift this geopolitical balance we have currently, specifically with Europe and Russia, and through this transition, enable a more democratic way of energy sourcing.”

At the moment, her main concern is preserving Ukraine’s research culture and the lives of those who make up the nation’s educational infrastructure so that there will be a foundation on which to rebuild in the future.

“I am passionate about this,” Zenyuk says. “It’s just incredible how supportive the UCI community has been in this effort.”

UCI’s Brilliant Future campaign, publicly launched on Oct. 4, 2019, aims to raise awareness and support for the university. By engaging 75,000 alumni and garnering $2 billion in philanthropic investment, UCI seeks to reach new heights of excellence in student success, health and wellness, research and more. The Henry Samueli School of Engineering plays a vital role in the success of the campaign. Learn more at https://brilliantfuture.uci.edu/the-henry-samueli-school-of-engineering.