After last year’s media storm, Judit Giro Benet, co-founder and CEO, is determined to bring The Blue Box to shelves across the U.S. by 2024. 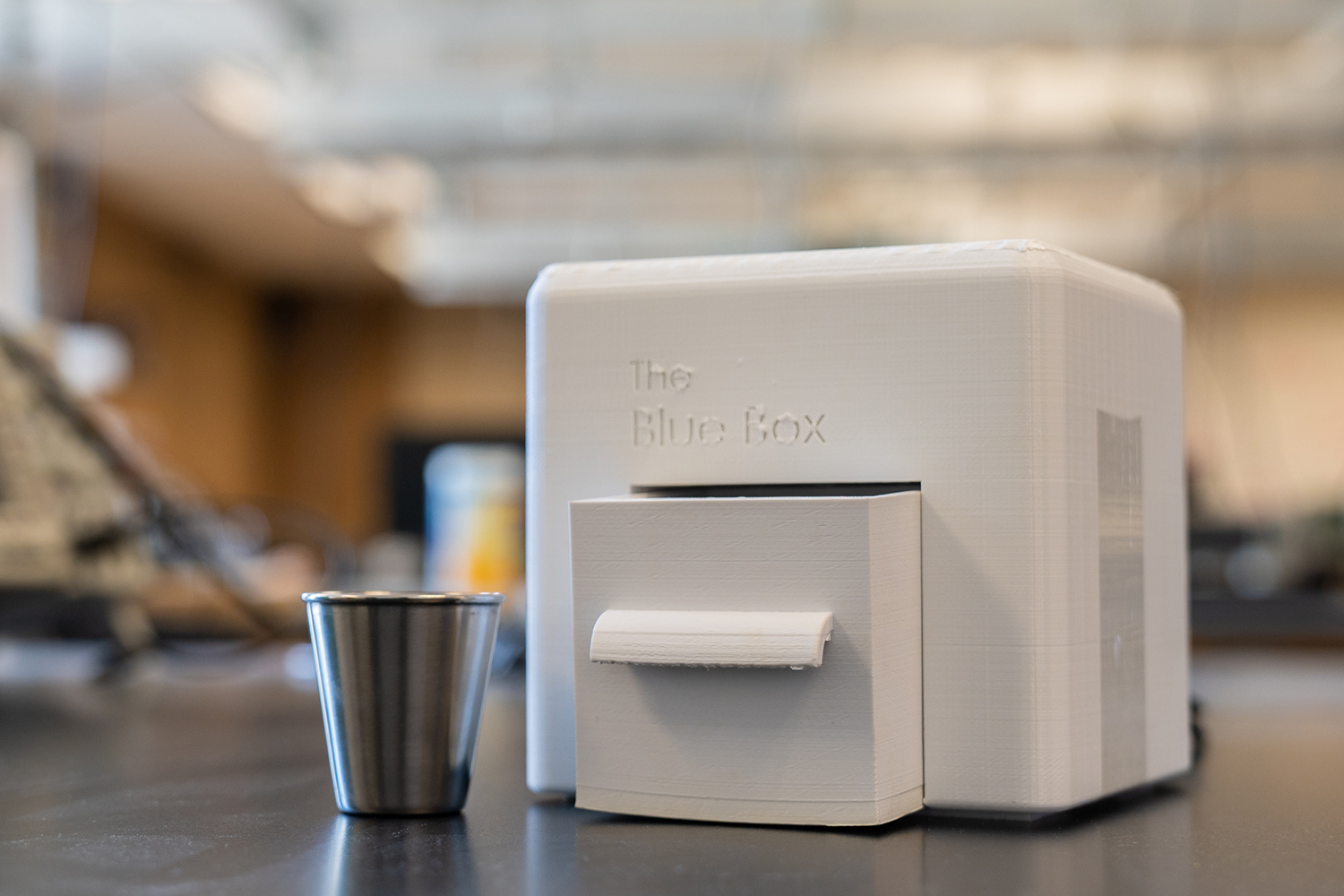 March 3, 2022 - In a world of instant gratification, clinical test results are no exception calling on researchers to work around the clock to find the fastest, most accurate way to deliver test results. Often making an impact on a diagnosis or the type of care a patient receives, time has never been more precious.

One UC Irvine (UCI) alum aims to have the first direct-to-consumer, at-home breast cancer detection test for sale in the U.S. by 2024, just 4 years after launching her startup, The Blue Box.

“Engineers struggle to unblock mysteries, and nature and biology already has the means to unblock these mysteries. The best way is to observe nature and try to emulate it in software and hardware,” said Judit Giró Benet, co-founder and CEO.

As Giró discovered, dogs are more than a person’s best friend. Often utilized to uncover narcotics, explosives and much more, a canine’s olfactory system was the naturally occurring system that sent Giró down her path towards creating a breakthrough innovation—a breast cancer detection test that uses urine.

Between 2013 and 2018, breast cancer mortality rates have slightly decreased and, according to the American Cancer Society, early detection through screenings and improved awareness have played a large role in this decrease. However, because of the pandemic inundating hospitals and fear surrounding the spread of the disease, breast cancer has been more difficult to diagnose and treat, according to the American Cancer Society, due to lack of access to mammograms and annual checkups.

Until the mid-20th century, at-home tests were not so common until the first at-home pregnancy test hit the shelves in 1977. Invented by Margaret Crane, a freelance graphic designer for a pharmaceutical company, “Predictor” let a woman know if she was pregnant within two hours at home instead of the standard two weeks in a doctor’s office, according to Giró.
However, unlike a current pregnancy test, which Giró considers to be a tiny lab within a device, Giró and her team have re-imagined the lab itself.

According to Giró, the most accurate test available on the market for breast cancer detection is the mammogram, which was created in 1965 and requires a patient to schedule an in-person appointment with a specialist. In 2019, the National Cancer Institute estimated more than 75 percent of women ages 50 to 74 years have received a mammogram within the past years and in 2020, there was an average 60 percent decrease in mammogram screening, according to a study published in Health Services Research.

“We need something better…women skip mammograms because they are painful. Even if you perfect the mammogram and add artificial intelligence, women still won’t get them,” said Giró.

Working with her colleague Po-an Chen, the team developed The Blue Box, which is encoded with proprietary sensor technology that measures certain biomarkers in urine, essentially using the same concepts as a dog’s olfactory system. Giró says the reactions from the residual components within urine are measured to determine if breast cancer is present.

“Breast cancer is an alteration of your physiology, it produces inflammation and triggers a number of very complicated metabolic alterations,” said Giró.

After completing her undergrad degree in Biomedical Engineering at University of Barcelona, in 2019 along with developing The Blue Box with Chen, Giró saw an opportunity to take the startup to the next level at UCI.

Giró studied as a grad student in the Master of Embedded and Cyber-physical Systems program working with Fadi Kurdahi, Ph.D., associate dean for Graduate and Professional Studies and professor of Electrical Engineering and Computer Science, in the Henry Samueli School of Engineering. After graduating, she continued to work on The Blue Box alongside her mentor, Kurdahi in his laboratory at UCI’s Center for Embedded & Cyber-physical Systems.

“Judit has a really broad perspective on where to go and what doors to knock on, so I think we are fortunate to have [UCI Beall] Applied Innovation and all these outlets that allow this transition from university labs into the market,” said Kurdahi. “One of the things that attracted her to UCI is the existence of such outlets.”

Kurdahi believes Giró technology has disruptive potential if proven on a larger clinical scale, though AI is still scratching the surface in the medical field. Kurdahi believes the key component is data analysis, which requires large amounts of data to drive home the accuracy and confidence of the test results.

“That’s where we are hoping all the stars align and we can actually make an impact,” said Kurdahi. “Think of the impact this could actually have on breast cancer. During the pandemic, more women missed their mammograms…but more and more, I’m seeing AI and machine learning potentially playing a huge role in health sciences.”

“The close access to the mentors is very beneficial,” said Giró. “You ask questions and before answering, the mentors really understand your case and they reply very specifically and that’s something that is really appreciated.”

The team also participated in Applied Innovation’s I-Corps program, a customer discovery program funded by the National Science Foundation that helps entrepreneurs determine the impact of their research projects and develop solutions to customer problems.

In the same year, out of thousands of applicants, The Blue Box was named the International Winner of the 2020 James Dyson Award, an international design competition that highlights startups who aim to solve a problem or address a global issue. Among several accelerators across the globe that accepted The Blue Box, they joined Global Grad Show’s startup accelerator in March 2021 and Berkeley’s Sky Deck Hotdesk incubator in May 2021 and UC Launch in 2022, where they got second place at Demo Day.

Kicking off 2021, Giró moved back to Spain where throughout 2021, The Blue Box team participated in several startup competitions in Barcelona. In July 2021, TechCrunch named the company one of 20 most disruptive startups in the world.

“It was really exciting, we applied to TechCrunch because we like to apply to everything,” said Giró. “Every opportunity you get, you meet other founders and you learn from them. Meeting other founders is something I value a lot…every time you talk to a founder, you learn so much.”

Currently, The Blue Box has garnered support from across the globe and the team regularly receives emails from all types of professionals, from clinicians and researchers to patients and lawyers, interested in collaborating or purchasing her product. Giró dreams of a New York Times headline that reads “For the first time in history there have been zero deaths from breast cancer in Catalonia,” her home country.

“In the end I want to democratize breast cancer prevention, and this is achieved by having presence everywhere,” said Giró. “It wouldn’t make any sense to only be present in developed countries because why would we only do something that can only be used by part of the population.”

As Giró sets her course on bright horizons with a launch in the European market by 2025 and the U.S. market by 2024, she wants to maintain company growth and aims to develop her technology to become capable of detecting other cancers.

“The Blue Box is not only a device, but also a concept, it’s a change of mind, changing how people think about cancer,” said Giró.

Learn more about The Blue Box.