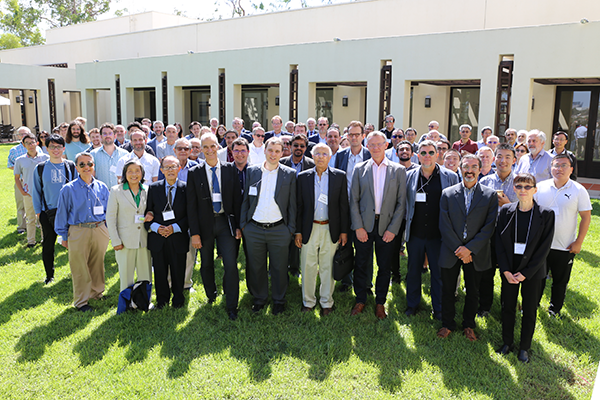 Oct. 25, 2022 – UC Irvine Distinguished Professor Emeritus Said Elghobashi was recognized for his lifelong achievements as a scholar, educator and administrator at a scientific symposium held in his honor Sept. 15 at the Beckman Center of the National Academies of Science and Engineering.

A pioneer in the field of computational fluid dynamics, Elghobashi has made seminal contributions to the understanding and modeling of multiphase turbulent flows. He joined the UCI faculty in 1978, the 16th member of the UCI faculty hired in engineering and the fourth in mechanical engineering. He has been with UCI since then and provided a critical foundation for the growth and prominence of the school’s Department of Mechanical and Aerospace Engineering.

More than 100 engineering researchers from the U.S. and abroad attended the day-long symposium, which featured four sessions and a total of 11 distinguished speakers presenting their recent research in the areas of multiphase turbulent flows, computational fluid dynamics, turbulent boundary layers and shear layers, and vortex dynamics. Applications of these areas include energy generation, propulsion, reduction of drag, biological flows and geophysical flows. 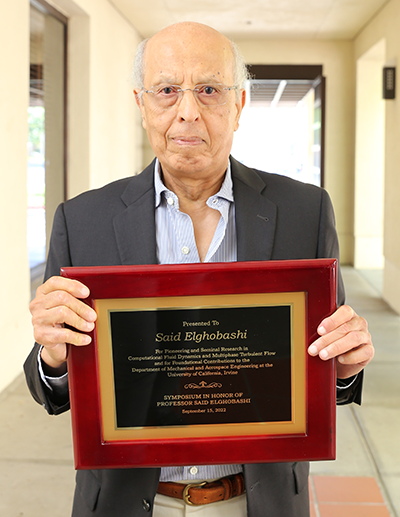 “It’s like a who’s who in fluid dynamics; all my heroes are here,” said attendee Tim Colonius, the Frank and Ora Lee Marble Professor of Mechanical and Medical Engineering at Caltech.

Samueli School Dean Magnus Egerstedt welcomed the audience, which included two former engineering school deans, Allen R. Stubberud and William A. Sirignano. Dean Egerstedt presented Elghobashi with a recognition plaque for his contributions to research and the university. “We are here to celebrate the truly remarkable research career and impact of Said Elghobashi,” said Egerstedt. “I am particularly fond of the fact that Said came to UCI as a new professor, and he went all the way to becoming a member of the National Academy of Engineering, spent most of his career at UCI. I use it as a selling point for new faculty. We are all grateful, Said, that you decided to make UCI your professional home.”

Many of the speakers expressed their appreciation for Elghobashi and gratitude for being invited to present their work. The first presenter was Martin Maxey from Brown University who discussed his work on recent applications of the force coupling method for particle laden flow. “I am honored to speak at this symposium. In the early ‘90s when this field was just getting started, it was nice, for me to have someone (Said) to talk to.”

Olivier Desjardins from Cornell University presented his work on a high-fidelity multiscale modeling framework for predicting turbulent spray atomization. “Thank you to the organizers for inviting me. It is an honor to present in front of Said. We are not of the same generation. He was required reading for me when I was a Ph.D. student, and I was influenced by his research directions.”

The presentations reflected the value of fundamental research in solving some of the most complex problems in engineering and science. Elghobashi’s ideas had made direct impacts on several of the topics presented but, more significantly, there was widespread inspiration from his meticulous characterization of the physics and mathematics of the problems he tackled. The success of Elghobashi’s doctoral students at top academic institutions was also evident with speakers including Keiko Nomura (UCSD) and Antonino Ferrante (University of Washington). 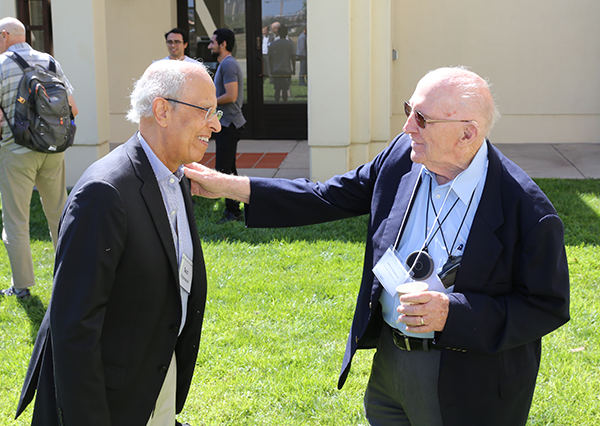 Elghobashi was appreciative. “First, I would like thank my colleagues William Sirignano, Dimitri Papamoschou, Feng Liu and Tryphon Georgiou for all their work and meticulous planning of this symposium. I also thank Dean Magnus Egerstedt for his comments and support. I am extremely grateful to all the distinguished colleagues who presented their latest research at the symposium. I am totally humbled by the presence of the world-renowned colleagues from the U.S. and Europe. My heartfelt thanks to all.”

“UC Irvine takes great pride in the achievements of Professor Elghobashi who has been a member of our community for more than 40 years!” wrote UCI Provost and Executive Vice Chancellor Hal Stern in a letter to the symposium organizers. “During this time, he has been a great colleague, contributing to our education mission through his work on graduate and undergraduate curricula in the Samueli School, to our service mission through his work as department chair and on various Academic Senate committees, and of course to our research mission through his research on computational fluid dynamics.”

The day concluded with a reception and dinner, which included tributes from various members of the community. In addition to Provost Stern’s letter, several congratulatory statements from colleagues who could not attend were read. Sirignano then delivered a statement highlighting the impact of Elghobashi on the stature of engineering at UCI.

Elghobashi closed the evening by expressing his gratitude. “I am humbled and overwhelmed. Thank you, thank you, for being here.”