Engineering Classes of ’92, ‘93 Gather for Reunion 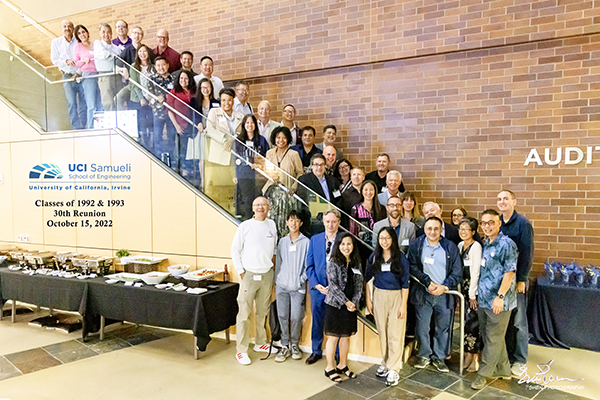 Nov. 1, 2022 - UCI engineering alumni from the classes of 1992 and 1993 celebrated their 30th year reunions together on campus Oct. 15, for an afternoon of reminiscing, rekindling friendships and a chance to flex their engineering skills on a team project challenge.

The event began with a walking tour led by Engineering Student Council President Kaylee Chew. The group walked by the newly dedicated HORIBA Institute for Mobility and Connectivity2, through Engineering Gateway and past CALIT2 to the new Interdisciplinary Science and Engineering Building, then by Ring Road, Engineering Tower, Engineering Hall and McDonnell Douglas Auditorium ending up at Rockwell Engineering Center. 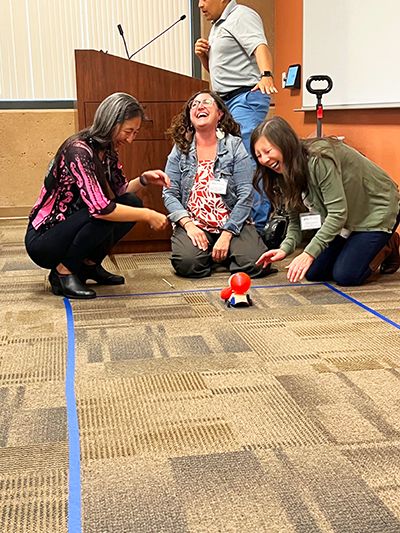 Next, the alumni headed to the Harut Barsamian Colloquia room in Engineering Hall for their project assignment. In teams of three or four, they built a balloon-powered rocket and competed to see whose aircraft racer traveled the furthest. Teams were supplied with two small balloons, a cardboard snack tray, four plastic wheels, two metal shafts, three plastic straws, two styrene plates, two foam cups and 10 paper clips. Students were on hand to monitor the challenge and help determine the optimum design, launch force and trajectory angle during testing runs. Alumni Matt Masuda ’92, Ken Wong ’92 and Willis Wong ’92 won the challenge; their racer used the slingshot method, stretching the balloon tied to a hook, for propulsion, see YouTube.

Finally, the alumni gathered in the atrium at CALIT2 for a short program and reception. They were welcomed by Rabi Narula ’92, who had the idea for the reunion in the first place, and by Samueli School Dean Magnus Egerstedt, who spoke about the importance of alumni engagement. Several faculty members also attended the reception, including Nader Bagherzadeh, Derek Dunn-Rankin, Faryar Jabbari, R. (Jay) Jayakrishnan, G.P. Li and Jean-Daniel Saphores.

Narula announced the launch of a fundraising campaign to support the Derek Dunn-Rankin & Katherine Martin Excellence in Engineering Education Endowment  in honor of Dunn-Rankin. “My buddies and I came together one day and talked about how one of our faculty members left a great impression on all of us. It was DDR. We didn’t know we all had the same impression of him so we wanted to do something special. We want to support this campaign to honor him, and the funds will support the students and school.”

Narula then showed a video, which featured six alums, two professors and the dean sharing their views on the value of a UCI engineering experience. Attendees exchanged contact information and vowed to keep in touch, then gathered for a group photo before saying their goodbyes.

Kurt Busch ’93 expressed this message to his fellow classmates via the video: “Let's not wait another 30 years to connect. Many of us alumni live in Orange County, let's connect on a regular basis, whether it's professionally or socially, to see how can we help each other. How can we help the alumni from the last 30 years? I think there's a lot that we can benefit from, and I think we should keep up this engagement and not just wait around for the next 30-year reunion.”