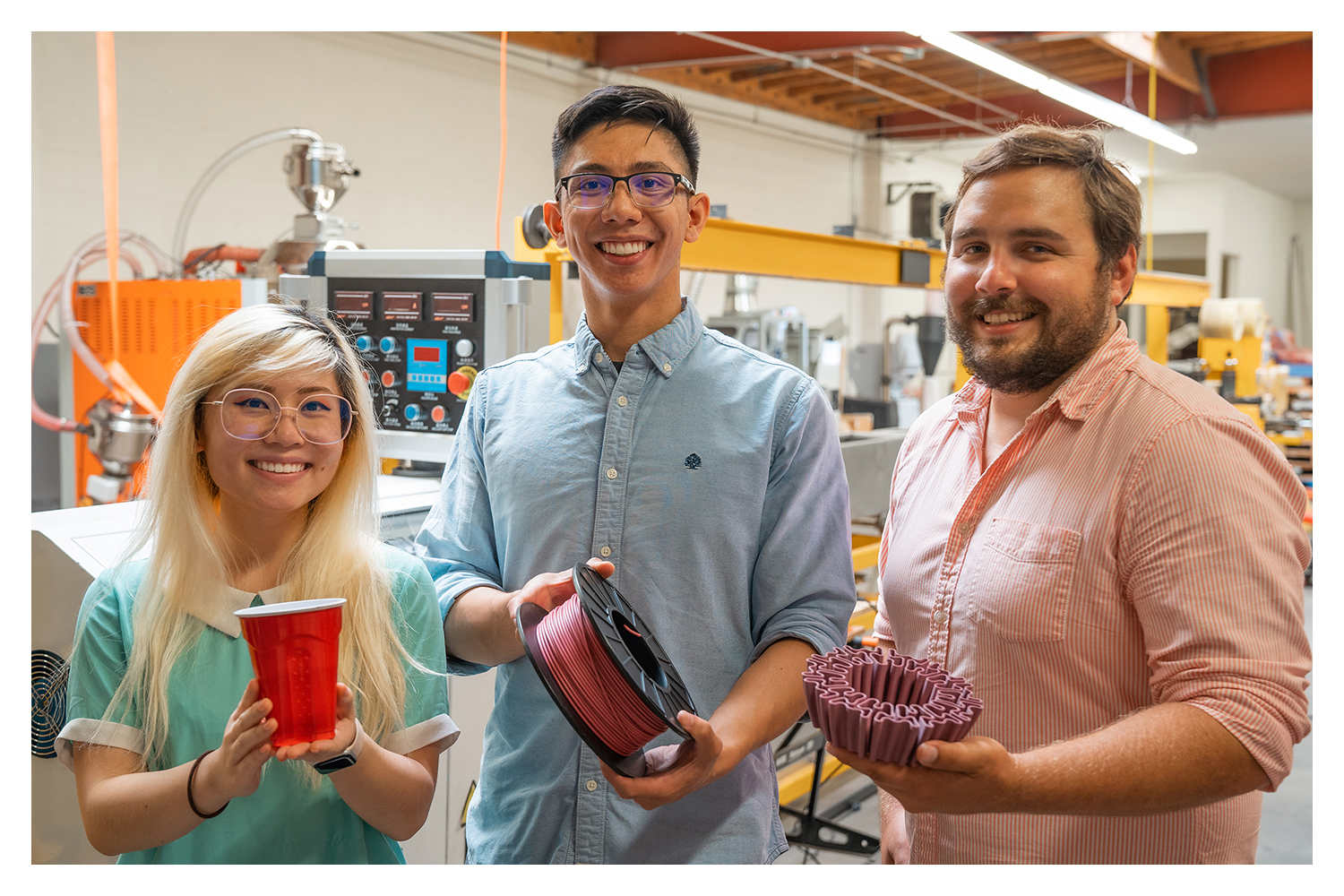 The 2015-2017 multidisciplinary project, overseen by Jesse Colin Jackson, now associate dean of research and innovation at the UCI Irvine (UCI) Claire Trevor School of the Arts, required students from several different schools at UCI to produce a demo that recycled a resource. When Closed Loop Plastics co-founders Will Amos and Aldrin Lupisan took on the project as UCI engineering students, they developed a system that could reuse 3D printing waste by melting old and excess prints to create the filament for 3D printers.

Currently, at the Closed Loop Plastics facility in Long Beach, the startup takes single-use plastic cups from the San Luis Obispo landfill, grinds the waste into plastic granules, decontaminates it, dries it and then transforms it into filament. The burgeoning company then sells its filament to 3D print retailers.

Unlike today’s standard recycling processes, Closed Loop Plastics’ system can recycle waste at the local level. This decentralized means of waste management allows more communities across the globe to recycle their own waste without having to use overseas recycling facilities.

“Recycling today is extremely inefficient,” said Sharon To, Closed Loop Plastics co-founder, chief technology officer and UCI computer engineering alum. “Not only is it expensive but it also generates a lot of waste in carbon emissions.”

By offering a localized means of recycling plastic, the Closed Loop Plastics team hopes to create a decentralized recycling infrastructure that both reduces global pollution and eliminates the costly and wasteful process of shipping plastic waste around the world.

But before Closed Loop Plastics could open its first facility, the startup found support in UCI’s faculty and entrepreneurial resources.

“We had to find a material that was available for us to work with, because not all plastics can be made into filament,” said Lupisan. “As far as materials go, polystyrene plastic [from red Solo cups] just made sense, because we were on a college campus.”

Lupisan and his team then caught the attention of former ANTrepreneur Center Manager and UCI Adjunct Faculty in the School of Social Sciences David Ochi, MBA, who encouraged them to enter their project into student business competitions. In the same year, the Closed Loop Plastics team made it to the final round of the Texas Christian University Values and Ventures competition in Fort Worth, Texas. In 2018, Closed Loop Plastics received $7,500 for placing second in UCI Beall Applied Innovation’s Tech Surge track of the New Venture Competition.

Lupisan and his team are grateful for Applied Innovation’s entrepreneurial resources, such as I-Corps, Applied Innovation’s market discovery program, as well as the Wayfinder incubator. The team conducted market research through the I-Corps program, made connections and improved their pitch game through Wayfinder. 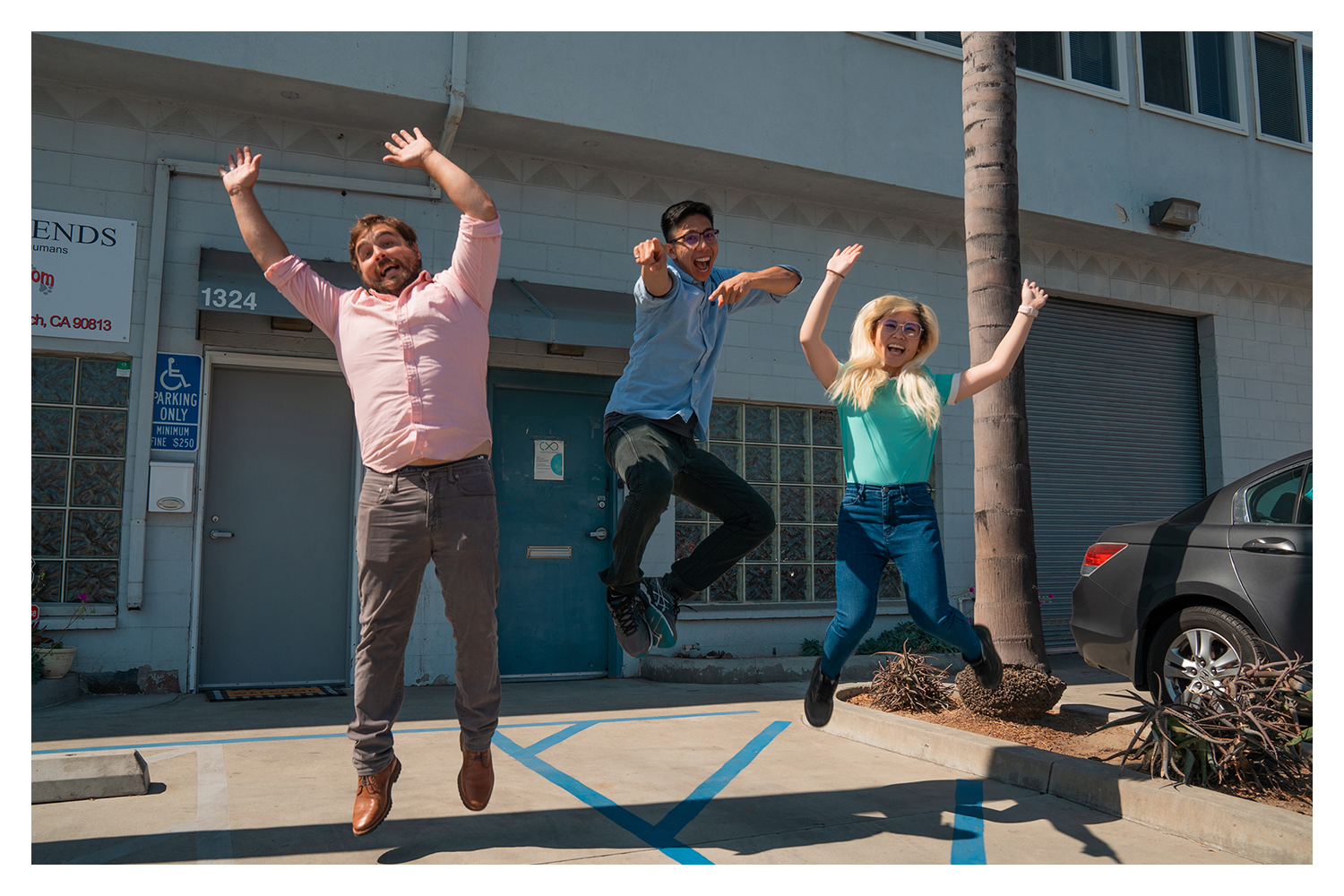 “We met some really good people [at Wayfinder] that helped us out,” said Amos. “We learned a lot of what we didn’t want to do. But we also learned how to go through that process of elimination to figure out where we did want to go.”

With one facility already open in Long Beach, Closed Loop Plastics hopes to expand its locations across Southern California to further its greater goal of decentralizing the plastic recycling industry and creating a more efficient means of turning trash into 3D printed treasure.

All art and photos by Julie Kennedy & Ryan Mahar

Watch our recent interview with the Closed Loop Plastics team.