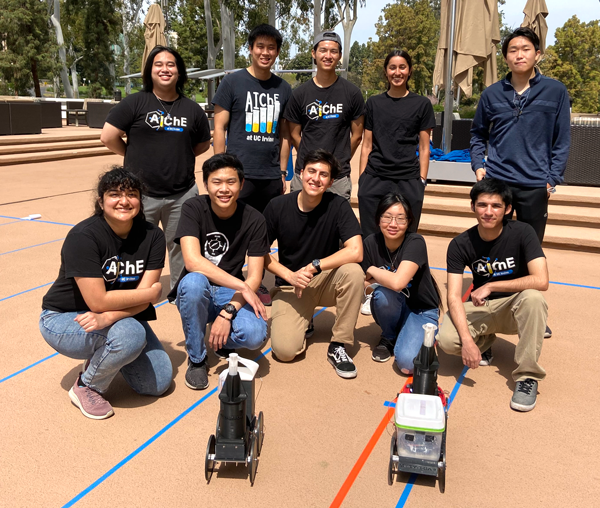 June 10, 2021 - In a true test of resilience, determination and ingenuity, Samueli School students navigated through adverse conditions this past year to design and build two entries for the American Institute of Chemical Engineers (AIChE) Chem-E-Car competition. UC Irvine was the only school in their region to participate in the contest. They co-hosted the western regional competition held May 1, on Engineering Plaza, and their first place winner, Steve the Car, will compete in the national contest in Boston this fall.

The annual competition challenges collegiate teams to design and construct a chemically powered vehicle within certain size constraints. The car must start and stop based on a chemical reaction. All teams must take and pass the AIChE safety training course and demonstrate a commitment to safety awareness, safety planning and safe practices in order to participate.

Last year, the team was hugely disappointed when it was sent home before being able to build their car, due to the COVID-19 pandemic. Li and Wey were on that team so they were determined to make it to the finish line this time around.

Due to COVID-19 pandemic safety restrictions, the students were unable to work in a lab on campus until just two weeks before the competition. Not having access to lab-grade chemicals and protective resources presented a major obstacle.

“We had to find a way to build the car without going into the lab, but still follow the normal safety guidelines of handling chemicals and also COVID safety guidelines,” said Wey. “The idea that Brian and I came up with was to use household chemicals that anyone can find at Target or Walmart. These are generally safe chemicals.”

They pitched this idea to the team, which had to research possible chemical reactions and determine what they could build from home. “Initially there were struggles trying to figure out what chemical reactions to use, but we just kept pushing the team forward,” Wey said.

Each of the team leads worked in their home and Li delivered lab equipment and chemical products to their door. “It was more like an assembly line, with lots of videos being shared. Something would break and then the car would have to go back and forth,” said Li.

“Brian and Clark did a fantastic job of formulating and managing our two teams through challenging conditions,” said Weinstock.

Both cars are named, in what has become a team tradition, after Weinstock.

Steve the Car (first place) used a homemade aluminum air battery, which is an electrochemical cell composed of aluminum and air, for the starting reaction. Aluminum acts as the anode, air acts as the cathode and charcoal is used as a catalyst to trap the air.

Steeveck (second place) runs with a thermoelectric generator. For the starting reaction to work, a temperature gradient must be produced onto Peltier modules, a device that converts the thermal energy into electric energy. An exothermic reaction of calcium oxide and water is used to create the hot side and a mixture of dry ice and regular ice is used to create the cold side. This produces an electrical output, which is used to power the motor.

Both car chassis were 3D printed and controlled with an Arduino circuit board. They both relied on the vitamin C and iodine clock method for stopping. A mix of liquid starch and hydrogen peroxide is syringed into a beaker containing a solution of vitamin C, deionized water and a variable amount of iodine. The vitamin-C solution is originally clear, but once the hydrogen peroxide is injected, it makes the solution gradually turn dark purple. The amount of time for the color to change is dependent on the volume of iodine used. A sensor detects the color change, which then tells the Arduino to cut power to the car, which stops it.

Two weeks before the competition, the UCI team was able to go into the lab on campus. At that point they had still not been able to get the aluminum air battery to actually work on their car. After consulting with Knight and Weinstock, they reached out to Iryna Zenyuk, associate professor in chemical and biomolecular engineering and associate director of the National Fuel Cell Research Center. Zenyuk, who helped out the team last year as well, has considerable expertise in electrochemical energy-storage and conversion technologies.

“Professor Zenyuk offered really, really good advice,” explained Wey. “She basically taught us the theory behind our idea, which enabled us to verify, validate and practically apply our approach. After that, it worked really well, but we were still putting the car all together the night before the competition.”

The competition is one part of the AIChE western regional student conference. When the original host university dropped out. UCI and UC Riverside stepped in to co-host the virtual conference. Any school entering a Chem-E-Car had to set up their own track and run their own event, with the judges participating via video conference. Three schools had registered to compete, but UCI was the only school to complete the required documentation by the deadline.

In the end, both cars completed the objective of starting and stopping based on a chemical reaction.
Steeveck traveled 0.74 meters, and Steve the Car reached 10.35 meters.

“The team leads showed real resilience, with all the changes and challenges we faced,” said Li. “In normal times, about two-thirds of the cars in the competition don ’t move, so even though we were the only entrants, we feel our first and second place finishes are real accomplishments.”