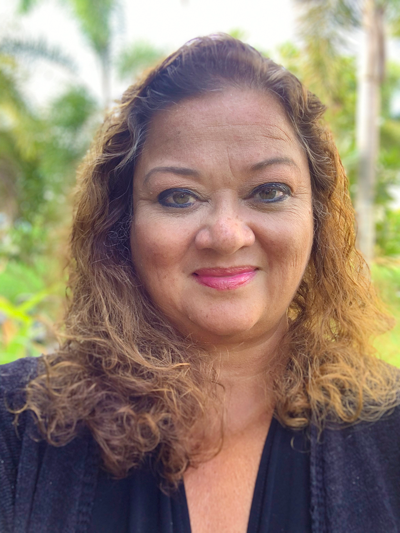 June 8, 2021 - Elizabeth “Betty” Gayle ’87 didn’t set out to shatter thick glass ceilings. Inspired by her parents’ grit, strength and love, she strove for excellence in engineering and the barriers broke away.

Born in Guam, Gayle came to UC Irvine in 1982 and graduated with a bachelor’s degree in civil engineering in 1987. After graduating, she returned to her homeland, built a thriving career and emerged as an active community member.

Why did you decide to become an engineer?

A high school counselor recommended I research engineering as a major because my math skills were strong. I looked into it, talked to my parents and decided to get my degree in engineering. I knew it would be difficult, but I was determined.

When I returned to Guam in 1987, it was at the start of a construction and development boom on the island. I was able to work in an industry that was thriving and hungry for new graduates. This boosted my trajectory in work goals and accomplishments. I had passed my Engineer In Training exam my senior year at UCI. After working four years as a junior engineer on Guam, I took my National Council of Examiners for Engineers and Surveying (NCEES) professional engineer exam in civil engineering. I had to recall my long nights of studying at UCI to prepare for the eight-hour exam, and I passed! It was a pleasant surprise since many don’t pass it on their first attempt.

My communications skills also helped me develop into a well-respected engineer. I found that many local engineers did not like to write reports, letters or other correspondence necessary in our field. I credit my parents for making sure I wrote and spoke clearly all the time, but also UCI for making all engineering seniors take a course on communications and public speaking.

Why did you choose UCI?

Back then, college applicants could only select one UC campus, so I selected Irvine because I really liked Southern California (no harsh winters), and it wasn’t as big as the other UC schools. I also knew the UCI School of Engineering was very well respected, so it seemed to be a good fit.

What do you do for work now?

I’m a vice president/senior civil engineer working for a local architectural firm, Setiadi Architects. My main role is project management for multidiscipline engineering projects. Most of my practice is for military projects on Guam, but I have also done services like planning, including environmental and military, on Guam, Japan, Commonwealth of Northern Marianas and Hawaii.

Recently, I’ve also been facilitating virtual and face-to-face design charrette meetings for military design engineering projects. This new skillset was born out of my experience leading board meetings for the Guam Board of Registration for Professional Engineers, Architects and Land Surveyors (PEALS) and the University of Guam Board of Regents.

What does it mean to you to be the first licensed female indigenous professional engineer in Guam?

I am proud to have spent my entire engineering career on Guam. I feel like I am contributing to the economic growth and prosperity of the island. I have worked with many military planners, engineers and stakeholders over the past several years, and all are quite surprised yet complimentary when they realize I am a local who has come back to support her island proudly.

What does becoming an NSPE Fellow mean to you?

Becoming an NSPE Fellow means my colleagues in the Guam Society of Professional Engineers, the local chapter of the NSPE (all men), recognize my contributions to the local engineering community. My 25-plus years of managing the Guam State MATHCOUNTS program, more than 15 years of being GSPE treasurer, in addition to serving on the PEALS Board are all appreciated by my colleagues. The glass ceiling on Guam is made of very thick glass – I was so happy to finally break through it. There are now only two NSPE fellows on Guam (I am the first female), and my selection is the first in more than 10 years.

I’m always eager to encourage students to pursue engineering or young engineers to join GSPE. It’s been so rewarding to see many of the MATHCOUNTS “mathletes” (competing students) come back to Guam as engineers or other STEM professionals. I am working with several engineers now who were mathletes when I first started managing it. I want to continue to expand Guam’s engineering community and hope to do so as an NSPE fellow.

Each of my parents inspires me for different reasons.

My late father inspired me to work and study hard, yet he also encouraged me to do whatever I wanted to do in life. When I asked what he thought of my becoming an engineer, he knew it might be difficult for a female to successfully complete an engineering degree, but he never tried to steer me away from it. I was always very independent growing up (I’m the second of five very competitive siblings), and my father allowed me to find my own way, even if I struggled along the way. While he tried to treat all his kids equally, he realized we were all unique and different; he gave each of us the right amount of space and encouragement to grow on our own. He was strict but also very generous.

My mother inspires me to be strong and steadfast. She was only 5 years old when Japan bombed and subsequently occupied Guam during World War II. Growing up during the war, she witnessed very harsh times, with her parents trying to keep their rice farm while her older brothers were forced to work for the Japanese. One brother never came back. Living more than three years under Japanese occupation made her a strong-willed young girl, who grew up to be a strong-willed, independent woman.

Although she never attended college, she always pushed each of us to try our best so we could get into college. My mom made sure we were all prepared for school in the mainland. One thing she was adamant about was that we spoke and wrote English well. English was not her first language, and she was punished in school after the war for speaking in her native tongue, Chamorro. For this reason, she did not teach us Chamorro. Her generation is now criticized for not passing down our indigenous language. But she felt she was preparing us for college in the mainland. My siblings and I are trying to learn the language now as adults.

I am still in awe when I hear stories about her growing up on Guam. Whenever I feel sorry for myself or stressed about an issue, I think, “Nothing could be as hard as what Mom went through during the war, so buck it up!” To this day, Mom is as nurturing, calming and sensitive as she ever was to us growing up. She inspires me to be the same way.

What lesson(s) did you take with you from UCI?

My freshman year at UCI, there weren’t other engineering majors in my dorm. I tried to do all my homework and exam studies on my own. The math was usually not a problem for me, but I found the physics and engineering a little difficult. By my sophomore year, I made friends from engineering classes, and we started to do homework and study for exams together in group study sessions. I could help my friends with math, and they could explain physics and engineering to me. We created a symbiotic group relationship, encouraging and helping each other.

I found this to be incredibly useful in my career as an engineer. Many projects I manage require multiple disciplines to collaborate and work together to solve a design. I credit my current project management abilities to my group-study experiences at UCI. The group engineering projects I had to do my last year at UCI were fantastic experiences in learning to work with people of different cultural backgrounds, ethnicity, skills, work styles and personalities.

I always looked forward to the Wayzgoose celebrations every year. They were fun times walking around the campus experiencing different foods, seeing classic cars, people dressed in various costumes, etc. The school of engineering always celebrated E-Week in spring – I looked forward to the egg drop contest from the top of the Engineering Building. I also had a great time working with a team of fellow classmates designing, building and then racing in a concrete canoe at an E-Week competition my senior year.

The UCI men’s basketball games were always fun, especially in the 1985-86 season. A bunch of us even drove up to Los Angeles to watch UCI win against UCLA. There was not much development around or near the campus when I first started at UCI, so we usually went off campus for social events, like to see “The Rocky Horror Picture Show” on Balboa Island.

Any advice for future Anteater Engineers – students or alumni?

Learn to work with others – no matter how independent you may think you are, you will still need colleagues, assistants or others who will help you in work and life. You can still be independent, but learn to collaborate. In these current times of mostly working from home, I still need to work well with my project team members. Collaboration and teamwork are crucial skills that I acquired at UCI.

UCI was a great time in my life! I love the friends I made, the experiences I had and living in Southern California. The campus has grown so much in the years since I graduated – it looks like such a world-class university now. I love to read about all the wonderful accomplishments of the university, its faculty and especially its graduates. Although I came back to Guam for professional and personal reasons, I cherish my time at UCI and am a proud Anteater. ZOT-ZOT-ZOT!