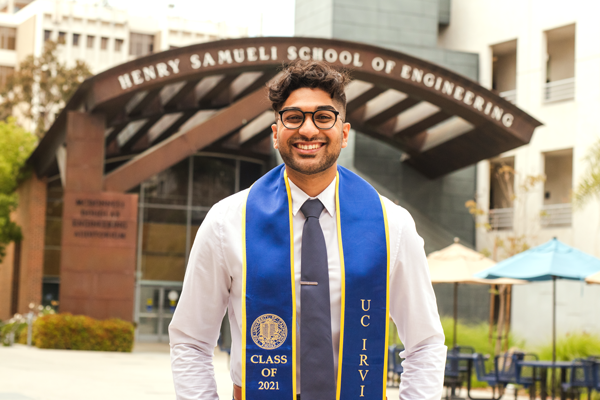 May, 27, 2021 - Sishir Jayanthi, a fourth-year mechanical engineering major, has been selected as the student speaker for the Samueli School of Engineering’s virtual commencement on June 12.

Jayanthi shared the experience that impacted him the most during his first year at UCI and inspired him to work diligently throughout his studies. “Later in freshman year, I unfortunately lost my mom to ovarian cancer,” he said. “My mom made a lot of sacrifices, put me through school and made me who I am today. That motivated me to work harder. I was always thinking, ‘I have to do this for her.’”

Due to his interest in debate, Jayanthi joined UCI Mock Trial in his freshman year and was involved for three years, which helped him polish his public-speaking skills and gave him the opportunity to meet new people on campus and across the country. In Mock Trial, students compete against other schools in tournaments that simulate court cases. Jayanthi felt Mock Trial, despite not being directly tied to his major, was a valuable experience that helped him grow the speaking skills that could be applied to many situations. “Everything I learned from Mock Trial directly helped me in my interviews and in my current projects,” he said. “Mock Trial helped me take what I’ve done and present it to people.”

Since June 2020, Jayanthi has been involved in the UCI Society of Automotive Engineers Cargo Plane project, working to build an electric regular-class cargo plane for the Aero Design West competition. The Society of Automotive Engineers is an organization that hosts a collegiate design series of competitions. Its Aero Design contest challenges teams to conceive, design, fabricate and test an aircraft that can take off, land and meet mission requirements. This year’s Cargo Plane project will attempt to carry a payload of soccer balls and metal plates during the Aero Design West competition in June. The team’s goal is to optimize the plane’s payload quantity, which will result in an increased “flight score” in the competition. As the structures design lead on the project, Jayanthi guides seven to eight students in designing and developing the primary structures of the plane.

“This experience taught me about leadership,” said Jayanthi. “A leader is not supposed to just get the work done. There are younger engineers on the project who want to learn, so I have to use my experience to help take them in the right direction.”

After graduation, Jayanthi will join Millennium Space Systems, a company that creates satellite solutions for the Air Force and other customers, as a spacecraft mechanical engineer. He dreams of building rockets and taking people into outer space. He believes space exploration is important to humanity. “As humans, being curious about things and asking questions have really sparked change in our society for generations,” he said. “I think that we have to keep doing that.  And there are other benefits, like with research on climate change, medicine and technology. We get a lot of that done by doing scientific experiments on the International Space Station.”

Jayanthi’s goal with his upcoming commencement speech is to motivate and give hope to UCI engineering students. “We’re going through a crisis right now, but to get through this, we have to understand that there are brighter days ahead and that there is hope,” he said. “There’s a bigger purpose to what we do as engineers. More so than ever before, the world is looking to us for solutions.”