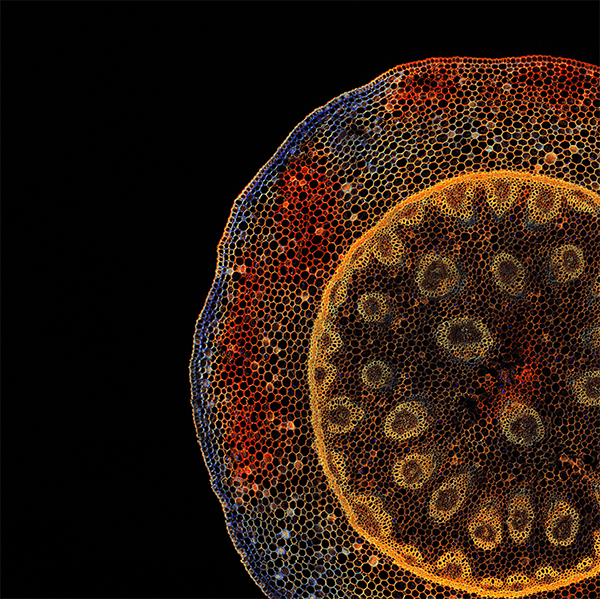 Led by Enrico Gratton, Distinguished Professor of biomedical engineering and director of the Laboratory for Fluorescence Dynamics at the Samueli School of Engineering, the team published their research in the April 15, 2021, issue of Nature Methods.

“This new technique works on live cells; there is no need for fixation,” said Gratton. “We believe the information we obtain could be augmented by genomic and proteomics data. More importantly, Phasor S-FLIM can provide results in tissues that are difficult to measure using these omics approaches. This would be a new paradigm for researchers who are using advanced imaging to solve hard-to-investigate living cells and gain important insights on human health.”

The new fluorescence microscopy method uses the color properties and emission duration of fluorescent dyes to achieve high specificity and sensitivity in imaging living cells. It is an extremely valuable tool in biomedical research as most of today’s microscopes rarely obtain emission spectrum and fluorescence lifetime, and only a handful can do it on the same microscope. This process is, however, very slow and requires high power for illumination, greatly limiting the acquisition speed and damaging the sample.

Moreover, many processes in the cellular machinery happen at the same time and can’t be addressed with current technologies. For example, the researchers built a 3D model (spheroid) of a breast cancer tumor in the lab and observed that some cells, after a while, leave the spheroids and migrate. Later, these traveling cells form metastases and secondary tumors, so they are ideal targets for further investigation and research on antitumor treatments.

With the Phasor S-FLIM system, super tiny glow-in-the dark chemical compounds called fluorophores are used to “color” a specific element of the cells. Fluorophores are just a few nanometers in size and become dark in a few nanoseconds, making their detection challenging. With a typical microscope, researchers can take only black-and-white pictures of cells, limiting the amount of information that can be collected.

This new technology can not only accurately distinguish the colors (spectral information) but also simultaneously identify cells by how fast they return to dark once the light fades (lifetime information). Previously, this combination of methods was inefficient and slow in capturing and processing the information. Being capable of distinguishing many glowing cells at the same time can speed up the analysis of biological samples.

“With Phasor S-FLIM, we obtain the spectral and lifetime information simultaneously by dividing the light emitted by the fluorophores according to color using a diffraction grating, which is similar to a prism, and collecting the light with an array of 32 detectors. Each detector collects a specific color and is coupled with state-of-the-art electronics capable of obtaining the lifetime information within nanoseconds,” said Lorenzo Scipioni, postdoctoral scholar in biomedical engineering and first author of the research.

“The amount of information gathered is large and challenging to process in real time. For instance, for every single image acquired in just a few seconds, we obtain almost 8,200 images! To overcome this limitation, we applied our phasor approach, which is an advanced computational method that performs much faster than conventional methods and can allow for the whole dataset to be processed in under a second.”

Blind unmixing:  Having access to such a wealth of information allowed the researchers to develop an unmixing algorithm capable of separating both the spectral and lifetime information from the sample without knowing anything about the sample’s composition. This has important applications in tissue imaging, in which many components of the tissue (metabolites, collagen, melanin and vitamins) intrinsically emit fluorescence with color and lifetime information that is difficult to unmix with other imaging methods.

Forster Resonance Energy Transfer (FRET):  FRET is a powerful technique capable of obtaining a quantitative measure of molecular interaction at distances below 10 nanometers. Unfortunately, its use in cells is limited by a poor understanding of the system’s photophysics and its relatively low brightness. With Phasor S-FLIM, scientists can apply FRET with a precision several times higher than current methods, allowing them to use it on challenging samples such as for the analysis of biosensors, engineered proteins capable of sensing physiological changes inside living cells.

Environment-sensitive dyes:  These are a class of fluorophores that change color and/or lifetime in response to changes in the sub-cellular environment at the nanoscale. With Phasor S-FLIM, researchers can characterize both changes at the same time, capturing more robust results and allowing them to combine multiple dyes together and obtain information about the structural and chemical composition of DNA, lipids and organelles inside living cells.

Physiological fingerprinting:  By using a combination of dyes and Phasor S-FLIM, the researchers were able to simultaneously obtain information about lipid content, membrane fluidity and metabolism that can be used to highlight which cells will form metastases in model tumor spheroids and provide insights on novel therapies for targeting them.