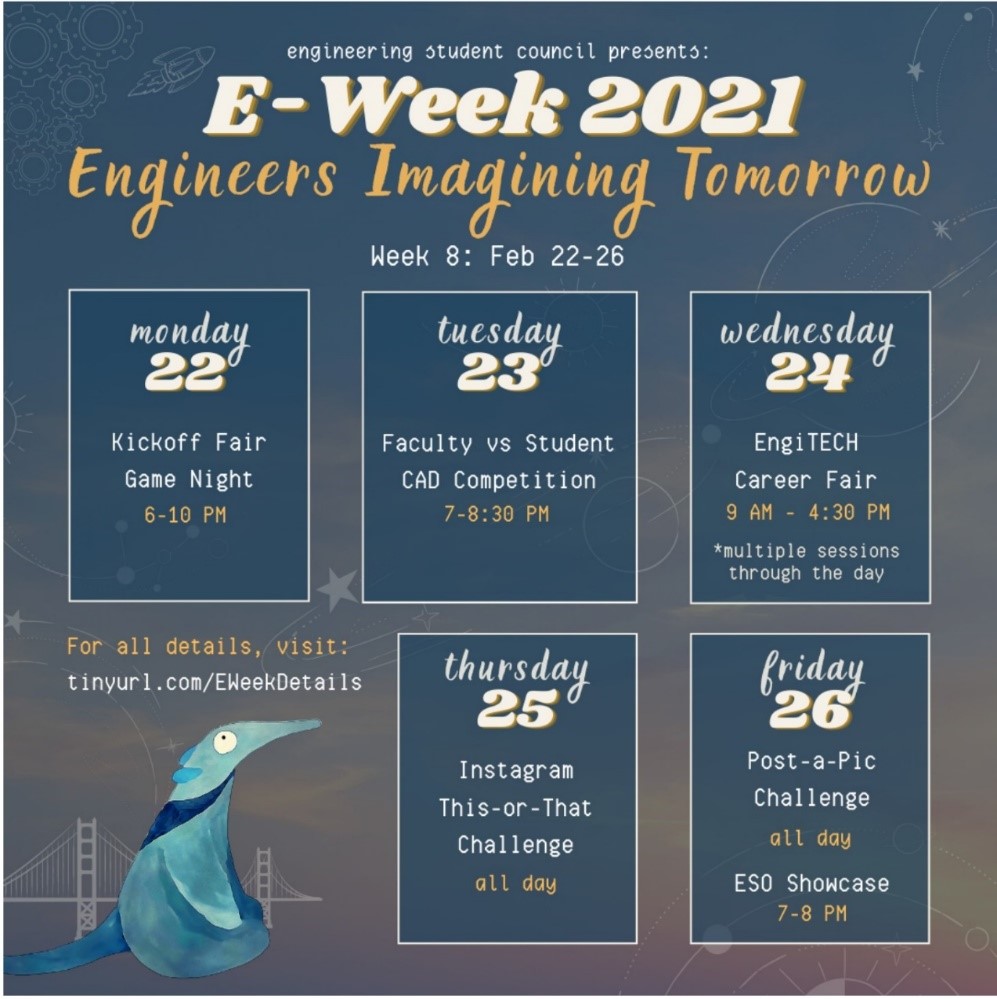 March 24, 2021 – E-Week 2021, a testament to the resilience of our Anteater Engineers, kicked off Monday, Feb. 22, with a week of virtual activities. Presented by Engineering Student Council (ESC), E-Week is an annual event aimed at increasing public awareness and appreciation for the engineering profession. This year’s theme was “Engineers Imagining Tomorrow.”

“I interpreted our theme as a celebration of engineers being at the forefront of innovation, always trying to break barriers and looking ahead to the future,” said Nyree Khachikyan, ESC president. “The pandemic has changed so much in the past year, and I don’t think we will ever go back to ‘the way it was before,’ but engineers can help foster positive change in our society.”

The Kick-Off Fair Game Night, held Monday, was a virtual version of the in-person fair that traditionally starts the week. Usually the Engineering Student Organizations (ESO) would staff booths on Engineering Gateway Plaza and offer carnival games while introducing their organizations to students. Instead, this year, virtual chat game rooms were created on the UCI Engineering Discord channel. Around 80 students attended the event.

On day two, ESC hosted a virtual CAD competition between three teams comprised of eight engineering students and two participating professors, while 70 additional students live streamed the event on Twitch. The competition included three teams competing against each other, each trying to design the coolest sketch on the collaborative Computer Aided Design platform called Onshape. By the end of the competition, a robot, castle and winning pirate ship had been designed.

Engitech, the popular E-week career fair, took place virtually on day three. ESC hosted 17 companies and 282 students on Zoom. EngiTECH offers students an opportunity to network and apply for internships and jobs, and this year was no exception. Many of the companies featured Anteater Engineering alumni as representatives, including Medtronic, Chevron, Applied Medical, Safran and Saratech. Students were able to chat for 10 minutes in private breakout rooms with companies of their choosing.

Hannah Hooper, a third-year biomedical engineering major, participated in Engitech. “I felt like I got more one-on-one time virtually than I would’ve in-person, and I didn’t have to wait in line. Since meetings were scheduled for 10 minutes each and the companies saw resumes in advance, the conversations were very personable and memorable even though it was through Zoom.” Hooper said.

Day four and five featured Instagram activities. A “This or That” survey drew 67 students who answered questions related to the current virtual learning environment then posted the results on their Instagram story. The “Post a Pic” challenge had 20 students participating, sharing pictures of on-campus and virtual learning memories that were special to them.

“This E-Week was so different from the others, but it was one to remember,” said Khachikyan. “What made E-Week so much fun in the past was the feeling of community in the school of engineering and interacting with peers. I am immensely proud of my council for emulating this same feeling in a virtual environment, while it was less personal, we still made the event special.”

And finally, the following annual Engineering Awards were presented through social media.

Professors of the Year

Graduate Students of the Year

Undergraduate Students of the Year

Engineering Student Organization of the Year