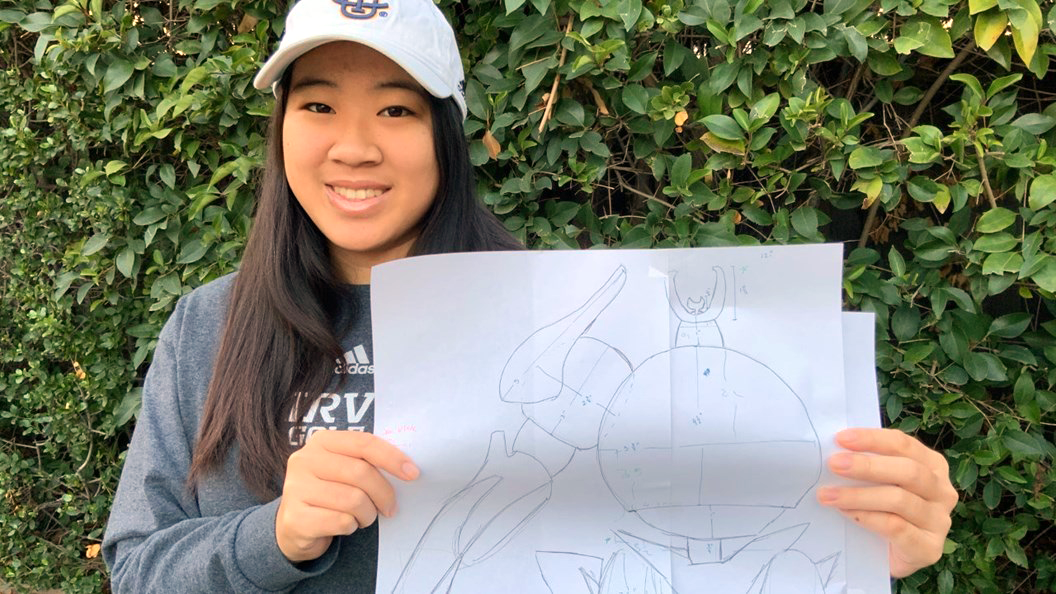 Feb. 22, 2021 - Women's golfer Megan Yang watches movies a little differently than the average viewer. It's not the acting or the story that catches her attention, but the effects and sets in the background.

While a future career in prop design wasn't clear when she started her UCI journey, the intrigue of a mechanical engineering degree has opened her mind to new possibilities.

"The appeal of mechanical engineering is that most any idea I have, I can bring into real life. If I want to design a cool robot, or have a product idea, I can make it a reality through what I have learned in engineering. The idea of being able to act on my ideas and bring them into the real world is what draws me the most to this major."

The sophomore from San Jose was drawn to UC Irvine after visiting the campus.

"I wanted to stay in California and when I was on campus it seemed very comfortable, very welcoming and could see myself going to school there. I also had family in Southern California so it was nice to know in case I ever needed anything they would be there."

While undeclared at the moment, she is two classes away from finishing her mechanical engineering requirements which should be completed at the end of Winter quarter.

"Freshman year I didn't know what I wanted to do and it was a little unsettling. At first I was thinking about the business school and took a few courses, but the economics classes weren't for me. I started taking some math and physics courses and they were more comfortable, I understood it and could see myself doing it in the future."

Yang ended up taking some engineering classes last spring and this past fall and one of those classes, ENGRMAE 52 – Computer Aided Design, required a project that would fuel her interest in engineering.

The project entailed building a robot, which she modeled after a character in one of her favorite movies, Big Hero 6.

"Getting started was super difficult because I didn't know how these components were supposed to work together, but as I did more research and figured things out like how much weight would be on each side and why certain components wouldn't work with each other, I began to figure it out. It was interesting when I started to build these pieces on top of each other, how the little struggles I was having would end up building a really cool robot."

The sketch was the very first thing she ever drew for the project and while she admits it wasn't a very detailed drawing, nor is the robot anywhere close to a producible product, the assignment would set her mind in motion.

"The project got me thinking more critically on how parts were put together and understanding that every detail needs to be thought out, such as how difficult it is to add something to the top of the helmet."

With all of her requirements done at the end of the quarter, Yang hopes to officially become a mechanical engineering major and is particularly looking forward to Engineering 1A.

"A friend told me they make drones and that sounds really cool."

"It is great to see my players so excited and passionate about their major and the unlimited possibilities of the future," head coach Julie Brooks said.

Yang started golfing in seventh grade and became serious after her parents told her she needed to pick between golf, ballet and gymnastics and focus on one.

"Golf seemed to be the one with the most opportunities and the most benefits in the long run."

When asked what she loved most about golf the answer was easy, competition.

"I'm a very competitive person by nature. Golf is largely an individual sport so the mistakes are your own and you don't have anyone to blame but yourself. It is freeing to me."

And while an individual sport at the junior and professional levels, intercollegiate golf is a team sport.

Without competition since last March, Yang has not only missed playing, but her teammates.

"I miss my network. I still have them as a network, but golf was the main thing that my schedule revolved around and if I was struggling I'd always have a teammate to talk to. I can still talk to them now but since we aren't together there's a missing part of my social life."

In the final round last spring at the Gunrock Invitational, Yang posted a career-best round of 71, making the abrupt stop even more frustrating.

"It was disappointing, but we knew it might be coming. I had just played really well and my game was coming together just as it stopped."

The quarantine not only helped her focus in on her major, but gave her time to learn coding. She and her sister began to develop a tic-tac-toe game that was unbeatable.

While she knows working in the film industry is a very niche market and hard to break in to, the idea of knowing a skill that can create an essence of wonderment is very exciting.

"Making the mythical possible is what is intriguing to me about film sets and amusement parks. They can create these animatronics that seem so lifelike and inspire wonder in people that they feel like they are in the place themselves."

With the spring season about to get underway, Yang knows golf will also help with her academics.

"Getting back to golf means getting back in to a routine and that something I'm looking forward to. I find the days I go workout or play I'm more productive."

Whether the technical skills are in the classroom or on the golf course, Yang is excited to see what comes next.