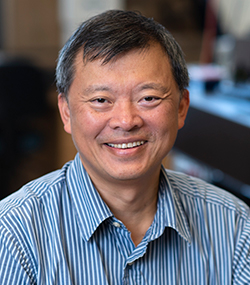 Nov. 29, 2021 – Abraham Lee, Samueli School professor of biomedical engineering, has been named a UC Irvine Chancellor’s Professor. The title of distinction – granted for a five-year renewable term – recognizes professors who have demonstrated unusual academic merit and whose continued promise for scholarly achievement is unusually high.

Lee’s research contributions are in microelectromechanical systems (MEMS), BioMEMS and microfluidics or lab-on-a-chip technologies. Early in his career, he developed microactuators for microsurgical devices and later applied these technologies to the lab-on-a-chip/microfluidics field. Notable microfluidic technologies pioneered in Lee’s lab include the magnetohydrodynamic micropump, dielectrophoresis for cell sorting, droplet microfluidics and cavity-bubble acoustic streaming transducers.

Lee joined the UCI faculty in 2002. Before coming to UCI, Lee served in the federal government as a program manager at the Defense Advanced Research Projects Agency and senior technology adviser at the National Cancer Institute. At UCI, Lee is director of the Center for Advanced Design and Manufacturing of Integrated Microfluidics (CADMIM), an NSF Industry/University Collaborative Research Center. He served as the editor-in-chief for the Lab on a Chip journal (Royal Society of Chemistry) from 2017-2020 and chair of the Department of Biomedical Engineering at UCI from 2010-2019.

Lee’s research has contributed to the founding of several startup companies. He owns 55 issued U.S. patents and is author of more than 120 journals articles. Lee was awarded the 2009 Pioneers of Miniaturization Prize and is an elected fellow of the National Academy of Inventors, American Institute of Medical and Biological Engineering, Royal Society of Chemistry, American Society of Mechanical Engineering and Biomedical Engineering Society.