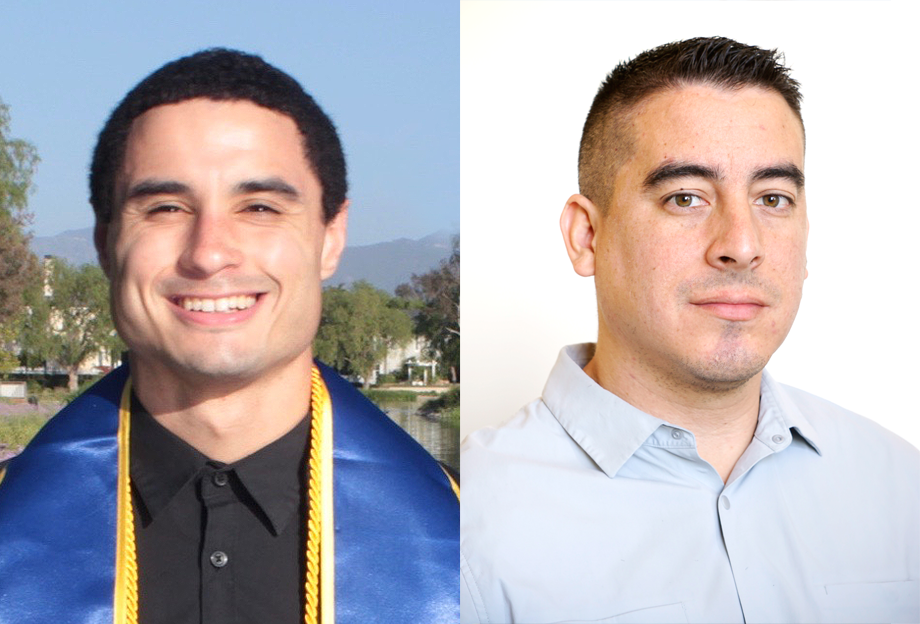 Aug. 28, 2020 - Two mechanical and aerospace engineering graduate students, Branden Butler and Cody Gonzalez, have received NASA fellowships in support of their research. The Samueli School students will each receive annual funding of $55,000 for three years.

Butler, who received his bachelor of science in aerospace engineering from UCI in spring 2020, started a research project in his senior year investigating how to model boundary layer ingestion (BLI) into jet engines with computational fluid dynamics. His adviser is Feng Liu, professor of mechanical and aerospace engineering. The NASA fellowship will allow him to continue the research as a graduate student working toward a doctorate.

The boundary layer is the thin stream of slower moving air that builds up along the skin of the fuselage and wings of an airplane as it flies through the air, causing additional drag. With boundary layer ingestion, an airplane’s engines are mounted at the rear of the aircraft so that the low-energy air flowing over the aircraft body is ingested into the engine and is then accelerated out the back. “This has been proven to reduce the power consumption needed for propulsion, which would decrease fuel burn,” explains Butler. “Unfortunately, these benefits do not come without complications.”

With the rear-mounted engines in the path of the boundary layer, the engine’s fan blades are exposed to additional stresses from the distorted airflow. A specially designed propulsor inlet is required to ensure that the benefits of BLI are optimal. “I will be working with Professor Liu and NASA to model BLI via computational fluid dynamics so the aerodynamic and propulsion benefits can be quantified for various propulsor-airframe configurations.”

“If a leap is to be made toward next generation aircraft, we must expand amenable flow regimes for preliminary analysis and increase diversity of design,” Gonzalez explained. The complexity of the flow field in such regimes would require too high a computational burden to be analyzed during the preliminary design phase, where many alternatives are currently left unexplored. Gonzalez proposes a novel reduced-order modeling framework for fluid dynamics analysis.

“Current approaches have led to stagnation in aerodynamics designs. Reducing time and computational costs of fluid dynamics analysis, while expanding the scope beyond traditional aerospace applications, would impact a broad selection of designers, including those that do not currently employ fluid flow analysis methods,” said Gonzalez.

The NASA Fellowships provide academic institutions the ability to enhance graduate-level learning and development by supporting students at a level that allows them to fully concentrate on academic and research proficiency without the need to seek employment. Through its Minority University Research and Education Project (MUREP), 17 minority-serving institutions were selected for fellowships in 2020.