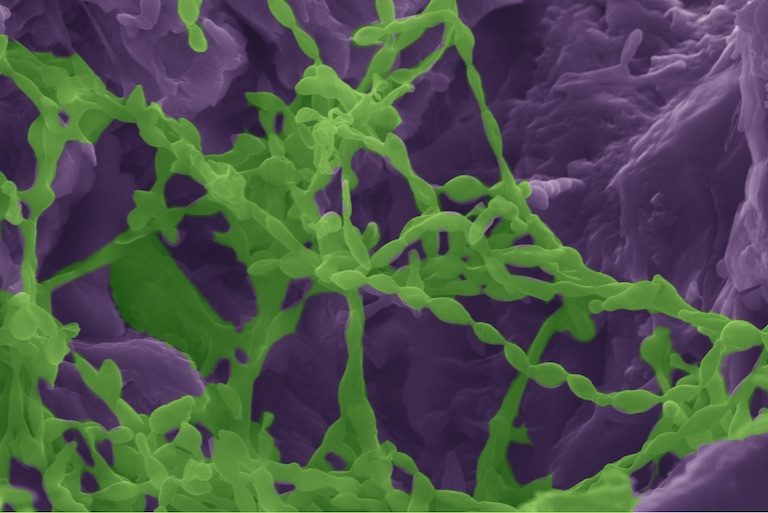 May 4, 2020 - In Northern Chile’s Atacama Desert, one of the driest places on Earth, microorganisms are able to eke out an existence by extracting water from the very rocks they colonize.

Through work in the field and laboratory experiments, researchers at the University of California, Irvine, as well as Johns Hopkins University and UC Riverside, gained an in-depth understanding of the mechanisms by which some cyanobacteria survive in harsh surroundings.

The new insights, published today in Proceedings of the National Academy of Sciences, demonstrate how life can flourish in places without much water in evidence – such as Mars – and how people living in arid regions may someday derive hydration from available minerals.

“The Army Research Office funded this project because they want to understand how organisms can survive in extreme environments,” said lead author David Kisailus, UCI professor of materials science & engineering. “They also wanted us to help translate that to enabling humans to cope with the harshest of conditions, whether it be out in the middle of the desert or while exploring other planets.”

The research team focused on the interactions of Chroococcidiopsis, a desiccation-resistant cyanobacteria found in deserts around the world, and gypsum, a water-containing calcium sulfate-based mineral. The colonizing life-forms exist beneath a thin layer of rock that gives them a measure of protection against the Atacama’s high solar irradiance, extreme dryness and battering winds. 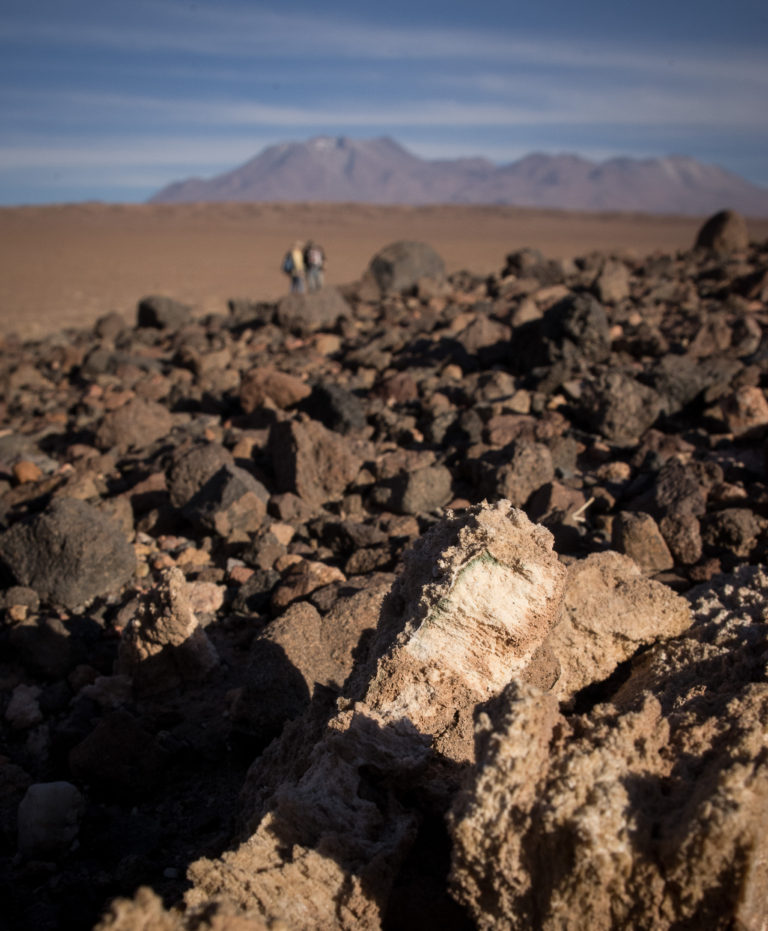 Co-author Jocelyne DiRuggiero, associate professor in Johns Hopkins University’s Department of Biology, traveled to the remote desert to collect gypsum samples, which were brought back to her lab in the U.S. She cut small pieces harboring cyanobacteria and sent them to Kisailus’ lab for materials analysis.

In one of the most striking discoveries of the study, the researchers learned that the microorganisms change the very nature of the rock they occupy. By extracting water, they cause a phase transformation of the material – from gypsum to anhydrite, a dehydrated mineral.

According to DiRuggiero, the impetus for the published work came when Wei Huang, a UCI postdoctoral scholar in materials science & engineering, spotted data showing an overlap in concentrations of anhydrite and cyanobacteria in the gypsum samples collected in the Atacama.

“Our analysis of the regions of rock where microbes were colonized revealed a dehydrated phase of calcium sulfate, suggesting that they extract water from the rock to survive,” Kisailus said. “We wanted to do some more controlled experiments to validate that hypothesis.”

DiRuggiero’s team then allowed the organisms to colonize half-millimeter cubes of rock, called coupons, under two different conditions: one in the presence of water, to mimic a high-humidity environment, and the other completely dry. Amid moisture, the gypsum did not transform to the anhydrite phase.

The cyanobacteria “didn’t need water from the rock; they got it from their surroundings,” Kisailus said. “But when they were put under stressed conditions, the microbes had no alternative but to extract water from the gypsum, inducing this phase transformation in the material.” 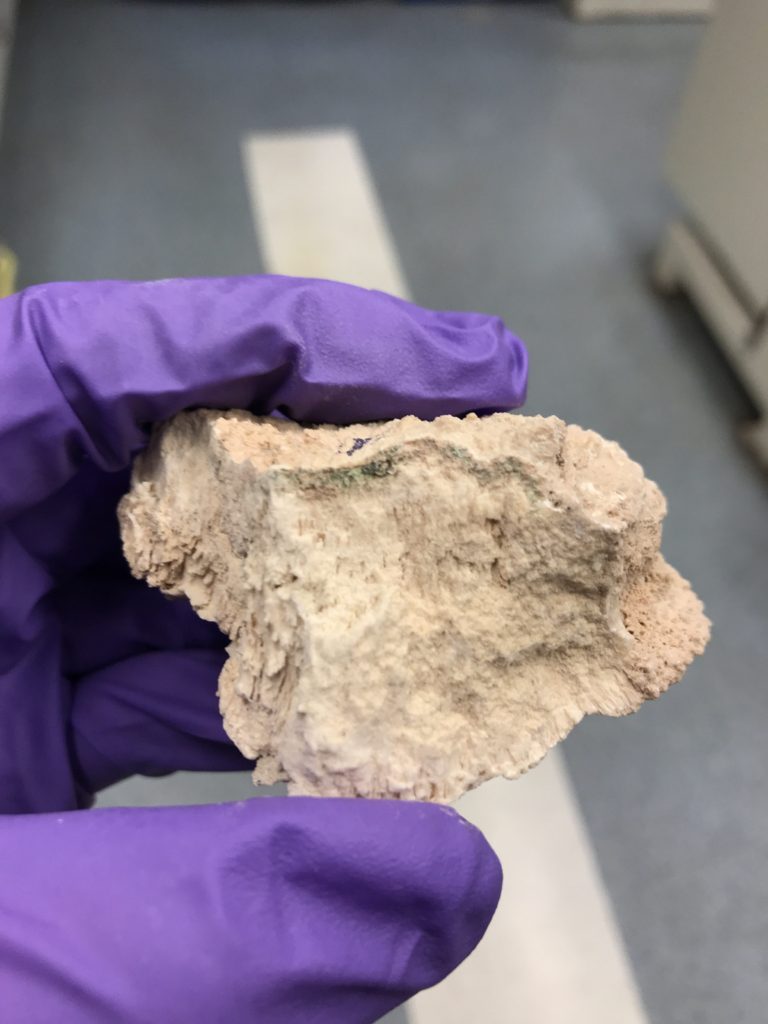 His team utilized a combination of advanced microscopy and spectroscopy to examine the interactions between the biological and geological counterparts, finding that the organisms bore into the rock like tiny miners by excreting a biofilm containing organic acids.

Huang employed a modified electron microscope equipped with a Raman spectrometer to discover that the cyanobacteria used the acid to penetrate the gypsum in specific crystallographic directions – only along certain planes where they could more easily access the water existing between faces of calcium and sulfate ions.

Kisailus said the project was a great example of interdisciplinary collaboration between microbiologists and materials scientists.

“Researchers have suspected for a long time that microorganisms might be able to extract water from minerals, but this is the first demonstration of it,” DiRuggiero said. “This is an amazing survival strategy for microorganisms living at the dry limit for life, and it will guide our search for life elsewhere.”

Robert Kokoska, Ph.D., program manager at the Army Research Office, an element of the U.S. Army Combat Capabilities Development Command’s Army Research Laboratory, noted: “The Army has a strong interest in how microorganisms well-adapted to extreme environments can be exploited for novel applications such as materials synthesis and power generation within these harsh environments. This study provides valuable clues for uncovering the evolved design strategies used by these native, desert-dwelling microbes to maintain their viability in the face of multiple environmental challenges.”

Funding for the work was provided by the Army Research Office and NASA.