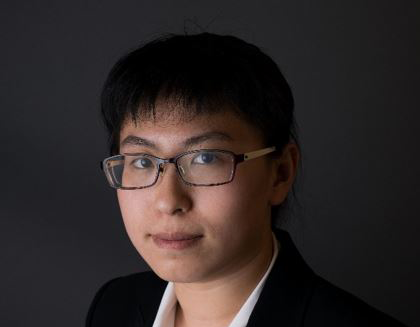 May 11, 2020 – Mechanical and aerospace engineering graduate student Danmeng Wang earned the first place Lecture Paper Award in the student competition at the 2020 IEEE International Symposium on Inertial Sensors & Systems this past March. Wang was scheduled to deliver her presentation, Dynamically Amplified Dual-Mass Gyroscopes with In-Situ Shock Survival Mechanism, in Hiroshima, Japan, but the event was changed to a virtual conference due to the coronavirus pandemic.

Wang’s research interests focus on the design and control of an inertial sensor called a micro-electromechanical systems (MEMS) gyroscope. This tiny sensor measures the rotation rate and orientation of an object; allowing the object’s path to be calculated without using GPS, which can sometimes fail in extreme situations. MEMS gyroscopes can be used in such applications, such as underground drilling robots. These robots have to drill, move and navigate underground causing shocks and vibrations to occur while working. This application requires MEMS gyroscopes to be small in size, highly sensitive and modified with shock survival apparatuses.

Wang’s paper, co-authored with her adviser, Professor Andrei M. Shkel, addressed the initial experimental results of the shock survival mechanism, called trap-and-hold. The trap-and-hold is an add-on mechanism for a high-sensitivity MEMS gyroscope. It helps to withstand shocks by switching the structure to a non-operational status, called shock-lock mode. By utilizing this method, a gyroscope will switch between its high sensitivity measurement mode and the immobilized shock-lock mode, while seamlessly measuring the rotation rate and orientation of the object.

“Obtaining this award was pleasantly surprising for me,” said Wang, who works in Shkel’s Microsystems Laboratory. “I would like to give credit to Professor Shkel and my lab colleagues Daryosh Vatanparvar and Doreen Hii.”