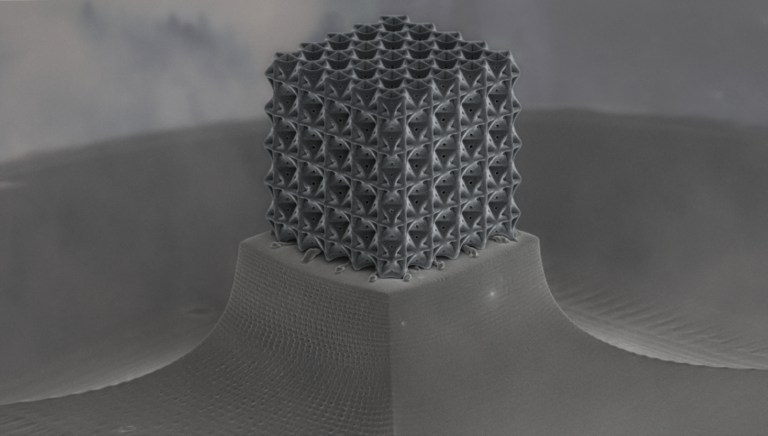 April 13, 2020 - Researchers at the University of California, Irvine and other institutions have architecturally designed plate-nanolattices – nanometer-sized carbon structures – that are stronger than diamonds as a ratio of strength to density.

In a recent study in Nature Communications, the scientists report success in conceptualizing and fabricating the material, which consists of closely connected, closed-cell plates instead of the cylindrical trusses common in such structures over the past few decades.

“Previous beam-based designs, while of great interest, had not been so efficient in terms of mechanical properties,” said corresponding author Jens Bauer, a UCI researcher in mechanical & aerospace engineering. “This new class of plate-nanolattices that we’ve created is dramatically stronger and stiffer than the best beam-nanolattices.”

According to the paper, the team’s design has been shown to improve on the average performance of cylindrical beam-based architectures by up to 639 percent in strength and 522 percent in rigidity.

Members of the architected materials laboratory of Lorenzo Valdevit, UCI professor of materials science & engineering as well as mechanical & aerospace engineering, verified their findings using a scanning electron microscope and other technologies provided by the Irvine Materials Research Institute.

“Scientists have predicted that nanolattices arranged in a plate-based design would be incredibly strong,” said lead author Cameron Crook, a UCI graduate student in materials science & engineering. “But the difficulty in manufacturing structures this way meant that the theory was never proven, until we succeeded in doing it.”

Bauer said the team’s achievement rests on a complex 3D laser printing process called two-photon polymerization direct laser writing. As a laser is focused inside a droplet of an ultraviolet-light-sensitive liquid resin, the material becomes a solid polymer where molecules are simultaneously hit by two photons. By scanning the laser or moving the stage in three dimensions, the technique is able to render periodic arrangements of cells, each consisting of assemblies of plates as thin as 160 nanometers.

One of the group’s innovations was to include tiny holes in the plates that could be used to remove excess resin from the finished material. As a final step, the lattices go through pyrolysis, in which they’re heated to 900 degrees Celsius in a vacuum for one hour. According to Bauer, the end result is a cube-shaped lattice of glassy carbon that has the highest strength scientists ever thought possible for such a porous material.

Bauer said that another goal and accomplishment of the study was to exploit the innate mechanical effects of the base substances. “As you take any piece of material and dramatically decrease its size down to 100 nanometers, it approaches a theoretical crystal with no pores or cracks. Reducing these flaws increases the system’s overall strength,” he said.

“Nobody has ever made these structures independent from scale before,” added Valdevit, who directs UCI’s Institute for Design and Manufacturing Innovation. “We were the first group to experimentally validate that they could perform as well as predicted while also demonstrating an architected material of unprecedented mechanical strength.”

Nanolattices hold great promise for structural engineers, particularly in aerospace, because it’s hoped that their combination of strength and low mass density will greatly enhance aircraft and spacecraft performance.

Other co-authors on the study were Anna Guell Izard, a UCI graduate student in mechanical & aerospace engineering, and researchers from UC Santa Barbara and Germany’s Martin Luther University of Halle-Wittenberg. The project was funded by the Office of Naval Research and the German Research Foundation.