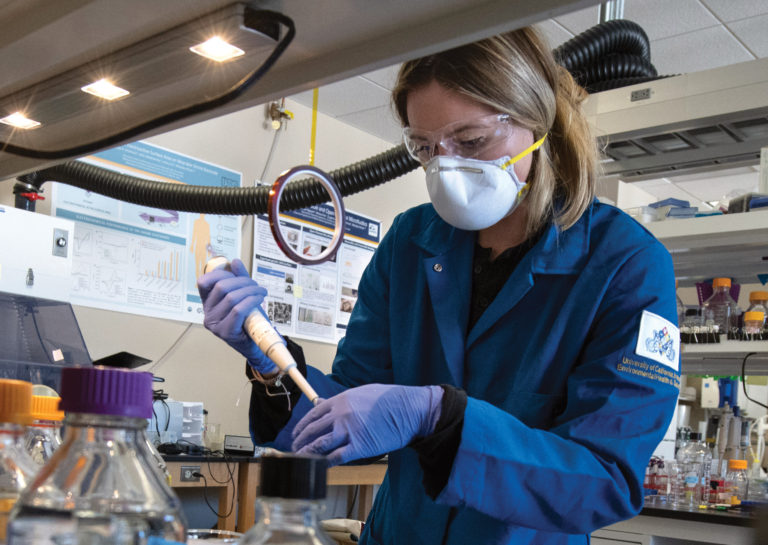 Dec. 9, 2020 - Researchers in the Henry Samueli School of Engineering at the University of California, Irvine announced promising results in the development of a noninvasive at-home antigen test to detect the spike of SARS-CoV-2 proteins in saliva.

The team, led by Michelle Khine, professor of biomedical engineering, posted their findings on the preprint server medRxiv.org. Khine is proposing a point-of-care platform that uses saliva, an electrochemical reaction and the children’s toy Shrinky Dinks to create the low-cost electrodes.

“A rapid, population-scale diagnostic and screening device is our goal, and we think our electrochemical aptamer-based assay could be an ideal candidate,” Khine said.

Working with Khine, materials science and engineering doctoral student Julia Zakashansky developed and tested the approach in the laboratory. The two have designed a biosensor with a DNA aptamer strand that recognizes and binds to the outer spike protein of the virus. When saliva containing the spike protein is placed on the sensor, binding occurs and triggers an electrochemical signal response, indicating presence of the virus.

“What we’ve shown is that we are capable of detecting really low levels of the viral protein, which is promising for future accuracy of being able to catch early infections as well as infections in asymptomatic people,” Zakashansky said. “This seems increasingly important as new data come out indicating high rates of asymptomatic transmission.”

Other COVID-19 tests rely on nasal swabs that work by detecting encapsulated genetic material through polymerase chain reaction, a process that usually requires a clinical laboratory setting, is complex and pricy, and can take days for results. The antigen saliva test, targeting the outer spike protein of the virus, which is not encapsulated, is a simplified alternative process that does not rely on costly materials or invasive samples.

The Shrinky-Dink device would come with a USB flash drive-sized reader called a potentiostat that plugs directly into a phone or tablet, with results appearing in approximately 30 minutes.

Khine’s next step is to validate the biosensor using the whole virus, not just the spike protein. She also noted that eventually, different DNA aptamers could be substituted in the platform to enable detection of a wide range of contagions that could potentially cause future epidemics.