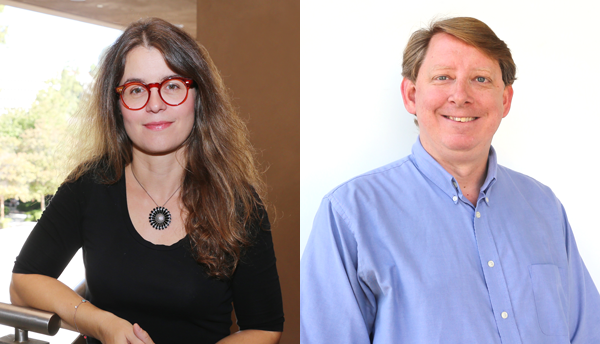 Dec. 3, 2020 - UC Irvine electrical engineering and computer science professors Athina Markopoulou and Peter Burke have been named 2021 IEEE Fellows in recognition of their outstanding research achievements. The fellow designation is awarded by the board of directors to no more than one-tenth of one percent of the organization’s voting membership – those considered to have extraordinary records of accomplishment. This brings to 19 the number of UCI electrical engineering and computer science active faculty recognized as IEEE Fellows.

Markopoulou is a professor, Chancellor’s Fellow and chair of the Department of Electrical Engineering and Computer Science who joined the Samueli School in 2006. IEEE recognized her for her contributions to network coding systems and network measurement; her research also focuses on computer network privacy and transparency, mobile and social networks, and internet of things.

She leads the UCI Networking Group and serves as the principal investigator of the National Science Foundation-funded ProperData Center, which launched this year to address the need for protection of personal data flow on the internet by combining computer science and engineering methodologies with economic policy.

“I am honored to receive this IEEE recognition and I’m grateful to my mentors within and outside of UCI,” she said. “My thought when I got the news was that we all have to ‘pay it forward,’ ... to continue to support our early career faculty and help position them on the path to such awards.”

Burke, professor of electrical engineering and computer science, who has joint appointments in biomedical engineering and materials science & engineering, was recognized for his contributions to active and passive microwave devices. After joining the UCI faculty in 2001, Burke embarked on research into carbon nanotubes and graphene, making significant contributions to quantum electronics, quantum information science and high-speed semiconductor devices, and revolutionizing ideas about how electromagnetic waves propagate along one-dimensional quantum wires.

His current research focuses on designing and using nanoelectronic-based instrumentation to probe, measure and analyze electrical activity in live mitochondria. This can lead to a better understanding of the pathways used by disease, including cancer, diabetes, Parkinson’s and heart disease.

Burke is the recipient of numerous awards, including the Young Investigator award from the Office of Naval Research and the Young Investigator Program award from the Army Research Office. He also won a 2005 School of Engineering Maseeh Award for Outstanding Research and a 2014 Samueli School Faculty Innovation award, and was recognized in 2017 by the Boy Scouts of America with its Outstanding Eagle Scout Award for lifetime achievement.

“It is a pleasure to be recognized internationally by IEEE, the largest professional society in the world, for the quality and impact of the work done in my lab at UC Irvine,” Burke said.  “The contribution of my lab to active and passive microwave devices, which are used in wireless communications, takes on an especially poignant and hopeful significance in this time, continuing to enable people around the world to connect.”